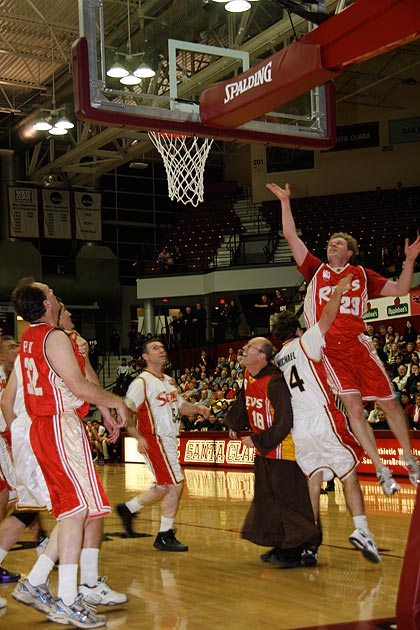 Families and individuals filled Santa Clara University’s Leavey Center on February 4 carrying signs to root on their favorite basketball player and those who were undecided could pick up a pre-printed bright yellow sign and join in the cheers. The players, who wore red and white jerseys, were eager to battle each other, but the basketball teams weren’t from Santa Clara University or another member of the West Coast Conference and the fans weren’t typical college students. Instead, the players were priests and seminarians, the fans were parishioners of various churches throughout the Bay Area, and the match up was the 5th Annual Priests Versus Seminarians Basketball Challenge put on by the Diocese of San Jose.

Going into the game, the series was 3-1 Revs. The Revs, who dropped the first game but had won the previous three matchups, were not ready to give up their winning streak. The Sems, however, had other plans. They were out to prove the younger team was the better team by beating their ordained counterparts. “The Sems want to win so they’ve been practicing two to three times a week,” said Father John “Powerhouse” Poncini, vocation director of the Diocese of San Jose. He added that the Revs hadn’t gotten much practice time together because of their schedules. “We aren’t very good, but if you see the parishioners, they love it. They love seeing us.”

Rubén Solorio of Catholic Charities and Most Holy Trinity Parish served as the master of ceremonies. Solorio welcomed the crowd prior to the game and provided some comical relief throughout the event. “We all gotta cheer them on, and make sure they don’t break any bones,” said Solorio in his opening. Solorio often prompted the crowd to pray for their team, “rumble” by stomping their feet and traded the phrases “God is good” and “all the time” with the fans.

At halftime, the Sems were leading the Revs 23-15 and Jeremy “J-Man” Santos of the Sems team rapped a song titled Fiat, or Latin for “let it be”, and joked about how he learned how to rap at Seminarian school.

The Revs made a strong push in the second half and even led for a few minutes, but the Sems were not going to lose easily. They surged at the end and came out ahead. The goal, according to Solorio, was to break the 97 total points scored last year, but the teams had to settle for 92 as the Sems beat the Revs 50-42.

“The main reason we do this is for the promotion of vocations,” said Fr. Poncini. “It’s a great event to bring priests and seminarians, or future priests, together. It brings Christians together and promotes unity.”

The scoring was low and most of the players were exhausted, but at the end of the night, the Catholic community had crowned a new king and next year the Revs will be out to regain the crown. For more information on the Diocese of San Jose visit www.dsj.org.