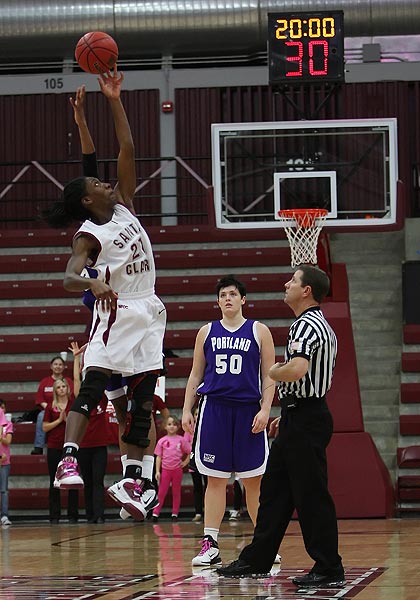 When Santa Clara University senior Lena Gipson tore her ACL the summer before her senior year of high school she was told she would never play again, but she was determined to prove everyone wrong. She spent the summer rehabbing and left for her freshman year at Arizona State University where she had signed a letter of intent to play basketball. After sitting out her freshman season, ASU left her with two options – sign away her eligibility to play and get an academic scholarship or lose her basketball scholarship and pay for her own education. “I decided that if I couldn’t play basketball there and clearly I was going to play basketball, I couldn’t stay there,” said Gipson.

Knowing she would play again despite what she was told by her doctors, Gipson pushed herself to walk and, as soon as she felt strong enough, started playing basketball in the ASU recreational center. She then made changes to her game to compensate for her knee. “I was getting quicker mentally than my body could move physically so I tried to use that and be a step ahead of people who don’t have to play with an injury,” said Gipson. “I was able to assess my strengths and weaknesses and my opponents’ strengths and weaknesses…I couldn’t just jump over everybody or power through everybody so I had to get them to jump into the air and lean into them so they would foul me.”

After leaving ASU, and before attending SCU, Gipson played at Fresno City College. In one season, Gipson led the team in scoring, rebounds, blocks and field goal percentage, earned All-American honors, was named the NorCal State MVP, and league MVP.

Now, as a senior, Gipson leads the West Coast Conference in rebounding and ranks 16th nationally. She also ranks among the top NCAA players in double-doubles. Gipson is one of two SCU players to reach the 800-rebound milestone and she surpassed the 1,000-point marker. However, she is much more focused on what she needs to do to be a leader on the team. “I think mentally putting myself into the game is exactly what I felt like I had to do and especially it’s present this year with one of the things our team is trying to work on is our team being mentally present of the little things that we should be doing in the game….I was able to think when my body was not reacting and then react to the situation at hand,” said Gipson. “It reminded me of how when my dad always bragged about how he could still play basketball even though he’s old. He says he can still beat people who are half his age because he plays smart because his body can’t jump anymore and he can’t run as fast so he will somehow use “the force” on players and get them to do things that he knows they’re going to do. So that’s kind of what I tried to do without telling him and this is probably the first time I’ve mentioned it. I tried to use “the force”.

Gipson says there are no selfish players on the team and credits her teammates with any success the team has. “[Junior Alyssa Shoji] is very cool in the game and she’s very aware of the situation and what needs to be done…She can see a play that we need to run and she’ll force it until we get the option for a shot. Sometimes I notice that we are so happy after scoring or we came back and Alyssa will just run back on defense and it’s like where did this all start? If you trace it back, it started from her….It didn’t just happen by fluke and it looked like Alyssa planned it and I think that’s really cool and something that is overlooked.”

“[Freshman] Ricky [Radanovich] has been a huge contribution. She earned her spot. She has amazing court vision for a freshman and just her willingness, like not only is she a 3-point threat…but she doesn’t want to be limited to that.”

When not consumed with basketball, Gipson tries “to mix it up”. “I like trying new things. I went through a cookie phase where I was baking. I know it’s completely random but I decided I wanted to make things from scratch so I just did that and actually have been experimenting a lot with cooking because that involves less movement so I can just go home and try to cook things. I like going out and doing outdoorsy stuff like hiking and I plan on going camping…but two things I want to do – I want to invest in the stock market and ride a motorcycle.”

After the season ends, Gipson will explore the option of playing basketball, possibly in the European League, as well as look at her graduate school opportunities. Eventually she plans on a career as an occupational therapist where she can “help people get back to doing what they want to do.”

Sports
Author Andrew BenschPosted on September 19, 2022
The varsity volleyball match between the Wilcox Chargers and Fremont Firebirds Friday night featured two teams in opposite situations. Seven of the 14 girls...

Sports
Author Andrew BenschPosted on September 14, 2022
Tuesday’s volleyball box score might make it look as if the Homestead Mustangs cruised to a straight-sets victory over the Santa Clara Bruins. Homestead...

Sports
Author Andrew BenschPosted on September 7, 2022
The Fremont Firebirds varsity volleyball team was happily cooled off by the air-conditioned gym at Castilleja School Tuesday afternoon. However, the on court result...
SPONSORED