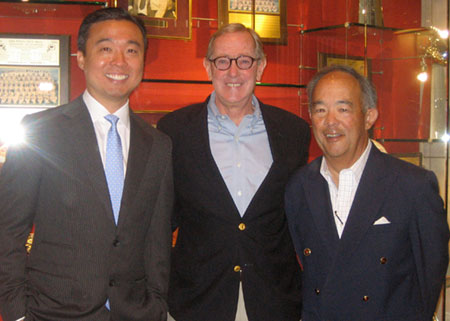 The team that hopes to bring the International Swimming Hall of Fame (ISHOF) to Santa Clara got a big boost last month from local real estate magnate Tod Spieker.

Spieker joined the co-chairs of the Santa Clara Blue and Gold Ribbon Commission – 49ers president Gideon Yu and venture capitalist Patrick Yam – at the 49ers headquarters on June 18 to pledge a substantial commitment to the project, although the exact amount hasn’t been disclosed yet.

Unofficial discussions have been going on since last year and a location next to the Hilton hotel is currently under consideration. Hilton hotel owner Lawrence Lui has pledged $1 million to the $12 million project.

“It’s a great time for Santa Clara and they Bay Area region,” said Yu. “It’s becoming one of the preeminent sports destinations, so bringing the Swimming Hall of Fame here makes sense.”

“It’s important for us to remember that the success of athletes like George Haines, Don Schollander, and Donna de Varona is part of the Silicon Valley DNA that continues to enable our successes today,” added Yam.

For Spieker, swimming is a personal passion. He swam competitively for Menlo-Atherton High School’s champion swim team in the 1960s. He attended UCLA on a swimming scholarship and was named an All-American in 1969. A member of the ISHOF board since 2001, Spieker is also known for his generosity in supporting aquatic sports facilities at Menlo-Atherton and UCLA.

“Santa Clara has been very proactive [in supported aquatic sports] with the Haines Swim Center,” he said. “The [ISHOF] lease is up in Florida and this is a logical time to make the leap to Santa Clara.”

“Tod’s been a longtime supporter of the Swimming Hall of Fame,” said ISHOF CEO Bruce Wigo in a phone interview. “He has been a philanthropist for swimming from Berkeley to Los Angeles. It [Spieker’s pledge] means a lot.”

The Swimming Hall of Fame was established in 1928 and grew to be a major attraction for Fort Lauderdale. But by 2000, support declined and it fell into disrepair. When efforts to rebuild in Fort Lauderdale fell through, ISHOF leaders decided it was time to open a new chapter in the museum’s history.

“The demographics have changed,” Spieker noted. “The Swimming Hall of Fame helped put Fort Lauderdale on the map. But Fort Lauderdale has changed. Santa Clara doesn’t need to be put on the map, but [the location] will help put swimming back in the forefront.”

“My last count is there are 65 inductees in the Hall of Fame from Santa Clara and that’s not even counting all the Olympians,” said Wigo. “The city has historic roots – which is key to success. Swimming is [central to] Santa Clara’s identity. In the 1960s there was George Haines, now the 49ers. Being right next door to a stadium – it makes a great destination.”

The ISHOF has some fascinating online exhibits. Visit www.ishof.org/video_archive/swimming to watch historic videos including an interview with Santa Clara Swim Club champion de Varona – the youngest swimmer to compete in the 1960 Olympics – and “Championship Swimming with George Haines” featuring the young Mark Spitz.