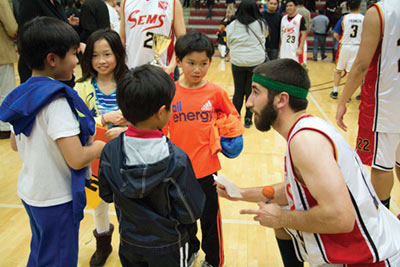 Priests and seminarians battled it out for the eighth annual Revs vs Sems Basketball Challenge at Santa Clara University’s Leavey Center on Feb. 21. The series between the ordained and the students has always remained close, with the Revs taking a 4-3 series lead after last year’s match up.

Third year seminarian, team captain, player and coach, Patrick Klekas, was in good spirits prior to the game, saying that the team had been practicing hard and was ready to take the title.

“I’m from Nevada,” he continued, “and if I was back home, I would put all my money on the Seminarians tonight, but I’m not going to guarantee any wins.” 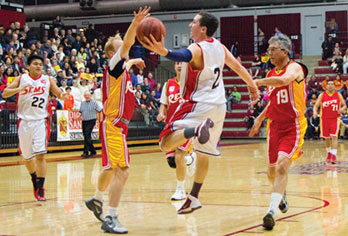 After a decent first quarter showing, one that saw a great reverse layup from Father Anthony “The Terminator” Uytingco from Saint Christopher Parish in San Jose, the Revs were off to a 15-13 lead.

The Sems tried to step up their game in the second, and got a huge block from Klekas with just under seven minutes left. Monsignor Francisco “Raging Bull” Rios of San Jose’s Our Lady of Refuge Parish answered with a beauty of a layup with six and a half minutes left in the second, but the priests’ age started to show near the end of the half, as Klekas was pulled down by Father George Schultze, a faculty member at Saint Patrick Seminary. Klekas’ basket was good for the tie, but he failed to make the extra shot from the free throw line, giving the Revs another opportunity and eventual 29-27 halftime lead.

In the third, the Sems had a hard time getting shots to drop, and the teams continued to battle, with Rios narrowly missing a buzzer beater that would have given the Revs a four-point lead heading into the final quarter of the game. 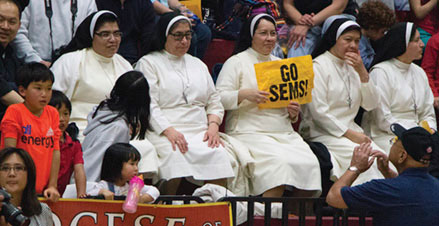 Klekas tied it early in the fourth, but the game continued to go in the Revs’ favor. In fact, the Sems didn’t lead until over halfway through the period, when Joshua Keeney of the Diocese of Sacramento hit a three that put the Sems up by one. As the minutes wound down, the Revs got into foul trouble, with each error giving the Sems an opportunity at the charity stripe, all leading to their eventual 57-50 victory.

As always, the name of the game was having fun and bringing interest in the Diocese of San Jose’s vocations. “A very important part of this game,” said Father John “3:16” Poncini, “is for the parishioners to see that the priests or normal and to get more vocations … The priesthood is enjoyable; it’s a wonderful vocation and we’re out here to have fun.”