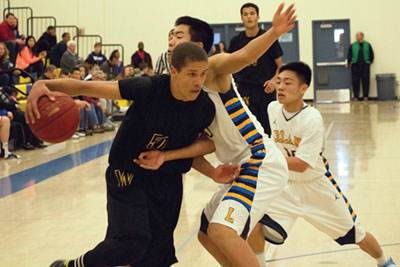 After losing mentor Creighton Lane to cancer last week, Wilcox players were playing with heavy hearts during the contest. But, just as Lane preached perseverance and commitment, the Chargers pushed through to claim the victory in a game where the team maintained the lead from the opening tip off through the final buzzer. 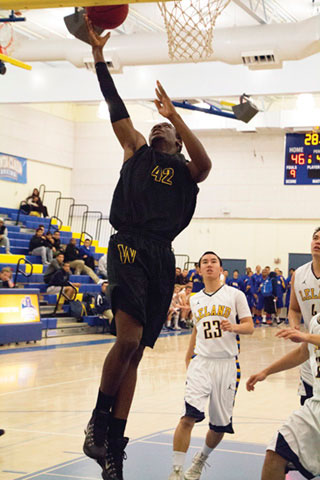 “We had a heavy heart going into the game on Thursday and I was fine through the whole game,” said head coach Patrick Galos, who played for Lane in 2001. “At the end of the game, a lot of the girls team that played with him in the 07-08 year when they won CCS, and I was the JV coach that year, started the black and gold chant and I felt the wheel works going, and then luckily the horn went off and I was able to run out and get some high fives with my guys, but it was tough. I just kept having to tell myself to be happy that it happened and don’t be sad that it’s over. That’s the one thing that kind of keeps you going throughout this whole process.”

Wilcox scored six points (senior Rubal Singh, sophomore Jase Wickliffe, senior Raj Singh) before Leland got on the board. The team then took a sizeable 13-6 lead at the end of the first quarter.

Leland chipped away at Wilcox’s lead in the second, getting to within two, before senior Christian Morte sank a three with under six minutes left to give the Chargers a five point lead. Leland would not be silenced and pushed forward to get within one. But, a foul on Raj Singh, basket by Morte and beautiful drive by sophomore Julian Jones got the Chargers up by seven with two and a half minutes remaining in the half. At the midway point, Wilcox had a six-point advantage.

In the third, Leland continued making efforts and, again, got to within two before Wilcox turned it up and grew their lead to seven. Early in the fourth, the Chargers found themselves up by 10 – and never looked back. A three by Jones expanded the lead to 13 at 50-37. Leland answered with a basket, but another three by Jones gave Wilcox a 14-point lead with over three minutes left. Even with a few questionable calls by the referees that gave Leland ample opportunities to score, the Chargers continued to prevail as their opponent only got to within nine points of the mounting Wilcox lead.

“Today was a great win … If we stick to Charger basketball, we have a chance at being successful,” said Galos.

Jones led the team with 15 points including three threes, followed by Morte with 12 (all threes) and Wickliffe with 12. And, in a wonderful showing of sportsmanlike conduct, the Santa Clara Bruins boys team shook the hands of Wilcox prior to their contest with Los Altos – one in which they lost 57-43. Wilcox played St. Ignatius on March 4 (after press time).

Sports
Author David AlexanderPosted on April 21, 2017
At the youth level, one of the most important qualities a lacrosse goalie can have is the ability to fight the urge to flinch...

Sports
Author Andrew BenschPosted on September 17, 2018
Thursday afternoon at Wilcox was the setting for all four rivalry games. The Santa Clara Bruins and Wilcox Chargers varsity and JV water polo...

Sports
Author Melissa McKenziePosted on September 10, 2014
With recognition from the City of Santa Clara and USA Synchro for half a century of outstanding performance and excellence, the Santa Clara Aquamaids...
SPONSORED