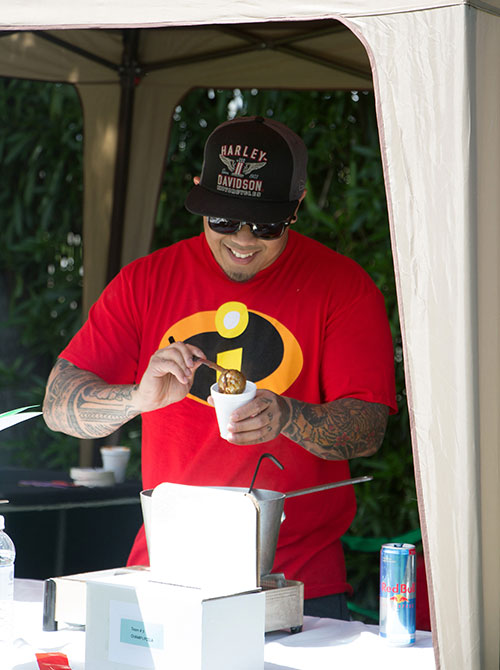 The smell of slow-simmered meats, spices, vegetables and beans wafted through the air as 13 teams vied for the chili king title at the Second Annual Justin’s House Chili Cook-off on April 23.

Held at Santa Clara’s Elk’s Lodge, the event brought together fans of cooking and chili fanatics for a good cause: to support Justin’s House, a local non-profit that empowers kids to choose a life unencumbered by addiction.

Founder Kelly Villarreal, whose late husband Justin Bell began his battle with alcoholism long before he was old enough to drink, started the organization in his memory. Bell had always told Villarreal that if he had a place to go that could teach him skills or somewhere to help him through tough times, he may have remained sober. It is a statement that stuck with Villarreal and a driving force behind her dedication to the cause.

Since Justin’s House began, one thing has remained clear; Bell and Villarreal have touched more lives than either ever knew, with Villarreal’s former Wilcox High School students consistently supporting Justin’s House and Bell’s former co-workers and friends–including his sponsor Gary Ceglar–being part of his legacy.

Second place, and $200, went to Rocky’s Island Hut, Joel Leonin’s entry. “I think this year our chili was pretty spot on,” said the Santa Clara resident. “Everybody came and complimented us this time. We added Hawaiian chocolate and Kona coffee and brought more flavors out.” Rocky’s Island Hut also took the award for best decorated booth.

“We had an in class competition so my five champs–two teams–did research on chili, came up with one recipe per team, we prepared it, we judged it as a class and the top chili recipe is what we used as our base to create the recipe for today,” he said. “It was the base recipe and we tweaked it and made it into our competition chili.”

More than 200 people attended the event, which raised over $5,000 for the Justin’s House.

“Starting a nonprofit is hard work,” said Villarreal. “By their very nature, nonprofits rely on their community’s belief in the mission and vision of the nonprofits they support. They also rely on their support–financial, volunteered time and help spreading the word about our work. We are grateful to all who show up to our events like this one and who support all year long. This kind of day inspires us to keep moving forward and to not give up.” Visit www.justinshouse.org for more information.

Full disclosure: The author of this article is a Justin’s House board member.

Early Bird Gets the Worm at City-Wide Garage Sale