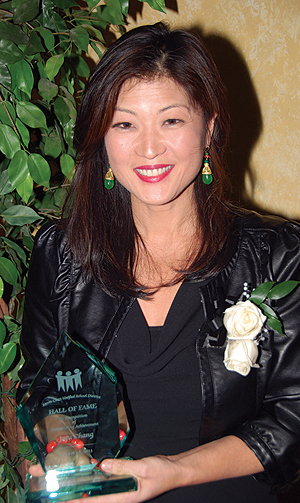 If someone attended one of the Santa Clara Unified School Board meetings, where the boundaries for Don Callejon School (DCS) were discussed, it would have been entirely possible to come away with the impression that, ìschools in the Santa Clara Unified School District (SCUSD) are cesspools of low-achieving students who will never amount to anything.î Some of the comments delivered by concerned parents indicated that if their child wasn’t allowed to attend DCS, they would move out of Santa Clara.

Unfortunately for the District, no one from the SCUSD Board responded with a more concrete statement, other than to question the veracity of those and other equally emotionally charged comments. However, on Saturday, March 19 at Fiorillo’s Restaurant in Santa Clara, the District held a recognition event that should serve as a challenge to all the parents who have ever wondered what kind of education their children will get if they are not allowed to attend DCS. The District held their Hall of Fame program to honor alumni who have brought extraordinary distinction to themselves, their professions, and their communities.

There are currently 50 current members in the SCUSD Hall of Fame. Their names include well known celebrities such as Margaret Jenkins, a 1921 Santa Clara High School (SCHS) graduate who was on the US Olympic Team in 1928 and 1932 and held the world record in the javelin throw from 1927 to 1932; Carney Lansford, a 1975 Wilcox High School (WHS) graduate, who was a major league ballplayer with several Oakland A’s World Series Championship teams; Mark Spitz, a 1968 SCHS graduate who won seven gold medals and seven Olympic/World records during the 1972 Olympics; Anna Chavez, a 1972 Peterson High School graduate (PHS) who was the anchor on a San Francisco TV News show and who co-hosted ìGood Morning Americaî to less well-known people such as Joseph Carrera, a 1934 SCHS graduate who was the Vice Chairman/CEO of Bank of America; Tony Anselmo, a 1978 PHS graduate, who, among other things, became the voice of Donald Duck in 1985; and Carlos Noriega, a 1978 Wilcox High School graduate who was a Mission Specialist on the Space Shuttle Atlantis.

This partial list of notable people who have graduated from SCUSD schools should give pause to those who feel that only one school can provide their children with a good education. No school district is defined by the accomplishments of any one school; rather it is the combined efforts of the personnel and the students’ parents that inspire children to reach higher, to want to learn and do more.

THOSE PREPARED BEST HAVE LESS STRESS

Schools
Author Erika TownePosted on May 10, 2019
On April 27, the community of Ponderosa Elementary School in Sunnyvale said a tearful goodbye to 83-year-old crossing guard William Ricks. Mr. Bill, as...

Schools
Author Cynthia ChengPosted on June 7, 2017
Taking Fashion 2 at Wilcox High School, Timothy Le, 16, realized that using a sewing machine was easier than he had expected. Inspired by...
SPONSORED