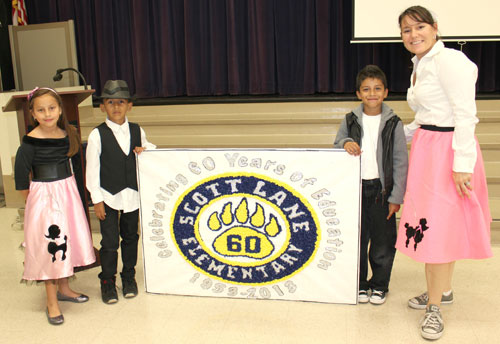 On September 30, Scott Lane Elementary School ventured into a time machine so the campus community could take a nostalgic look back on the 60th anniversary of the school’s opening. Staff members walked through campus in vintage scarves, Pink Lady jackets, and cat eye glasses with bright rims. Students held a sock hop dance during recess and munched on a typical 1950s diner lunch of cheeseburgers at tables decorated with checkered tablecloths. The celebration culminated in a fundraising walkathon.

“On September 30th, 1953, Scott Lane Elementary School opened its doors,” says Melissa Alatorre Alnas, principal of the school. “Today is dedicated to helping our students learn about life in the fabulous ’50s. Students dressed up and met Scott Lane alumnae, they learned how to do the twist and the hand jive, and they saw artifacts from the 1950s, such as Pogo Sticks and Howdy Doody dolls.”

“Every grade level had a math activity related to the number 60,” says Jill Peterson, a reading specialist at the school. “In the primary grades, the kids counted 60 things. In the upper grades, kids came up with mathematical equations that would equal 60.”

“When I first came here, I learned the school was built in the 1950s,” says Steve Kay, a former principal of the school. “At that time, a lot of soldiers and sailors were coming back from the war, marrying, and starting families. This was the brand new school for those families here.”

“We had a lot of Vietnamese, Mexican, and Portuguese kids coming during that time,” says Ev Miller of his early years teaching in the late 1960s.

“I built offices here for students to study in,” says Terry Denevan, who began teaching in the late 1970s. “The offices allowed the children to have personal space, and there was a place for them to put their lunch and hang their coat.”

“I saw movie and slide projectors become computers,” says Jymme Volta, who taught at the school during the early 1970s. “We had no Internet back then, so we used encyclopedias in the classroom. We wrote letters to the travel bureaus for the state reports in my fifth grade class.”

Something else that was not around at the school 60 years ago was a bilingual program. Today, the school serves a significant population of students who come from Spanish-speaking homes.

“We’ve had a bilingual program for 18 years featuring Spanish and English,” Alatorre Alnas says. “It’s not a dual immersion program. This program helps students to learn English and to be fully literate in English while, at the same time, maintaining their primary language.”