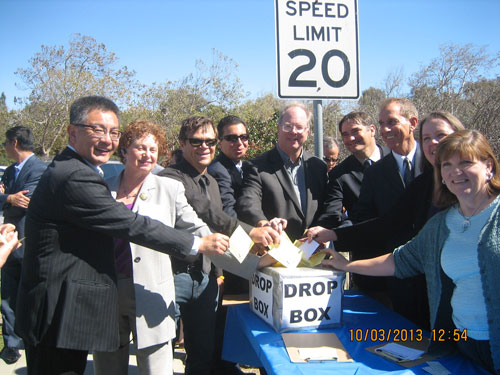 When it comes to state education policy, it wouldn’t be surprising to hear residents of Northside Santa Clara and San Jose say that it doesn’t seem like the right hand knows what the left hand is doing.

On one hand, the California Department of Education is pouring over $1 billion more into education by restructuring education funding and reverting redevelopment area property taxes to normal distribution to local agencies – of which K-12 schools are the largest beneficiary.

On the other hand, the California Department of General Services is refusing to consider the bid by the Santa Clara Unified School District for former Agnews East Developmental Center land in North San Jose (part of San Jose is in SCUSD) as a site for K-12 schools to serve the fast-growing Northside.

The DGS’s position, according to a June 2013 news release, is that it intends to sell the entire 81 acres to the highest bidder, as mandated by state law, to help reduce California’s massive debt.

The City of San Jose and SCUSD are collaborating in a joint proposal to purchase some of the land from the state of California by Nov. 21, for a state-of-the-art campus to serve 2,800 K-12 students, as well as for a San Jose city park and possibly a future San Jose branch library. There are no schools in the area, and students are bused considerable distances: across 880 to Montague Elementary, and across 101 to Buchser Middle and Wilcox High School.

The San Jose City Council has zoned the land for public use, and endorsed SCUSD’s plan. So any developer putting forward another proposal would have to first persuade San Jose to change the zoning.

Further, State Assemblyman Bob Wieckowski has introduced legislation (AB 503) that would authorize the Director of General Services to sell land to local agencies at less than market price for property intended for schools. The legislation also specifically enables the district to buy the 59 acres on the east side of Zanker Road between Center Road and River Oaks Parkway.

But none of this stopped the DGS from holding a meeting for prospective buyers last Thursday morning. In response, Wieckowski, San Jose City Council Member Kansen Chu and SCUSD Trustee Jim Canova (who represents the area) held a press conference at the Zanker Rd. entrance to the long-shuttered developmental center to rally public opposition to the state’s action.

They were joined by the entire SCUSD Board of Trustees, as well as SCUSD Superintendent Stan Rose, in launching a petition drive asking the state to clear the path for the district to buy the property.

Land use decisions “shouldn’t be about the highest bidder,” Wieckowski said Thursday. “You have to look at the value of a school versus the value of another strip mall. If you talk to executives at Cisco, eBay, every one of them will tell you – it will be the first thing out of their mouth – that we have to have a world-class school system. And the foundation of a good education system is local neighborhood schools.”

With all the residential and tech business development in the area – called Silicon Valley’s Golden Triangle – “it doesn’t take a genius to see that you have to have schools here.”

The plan for a school on the Agnews site is long-standing, explained Chu, and was part of the North San Jose Neighborhood Plan that he was part of developing more than five years ago, to provide a blueprint for the area’s development over the following 40 years.

“We identified Agnews as the best site for building a school, based on the available space, the build-up of the area, and the opportunity to provide a park on the same site,” he explained. “We have the plan, the money and we’ve put out a more than reasonable bid.”

Laura Carns is a typical Northside resident, as well as an active member of San Jose’s River Oaks Neighborhood Association. The electrical engineer has seen the neighborhood explode in the 10 years she’s lived there. And as both a resident and a technology professional, she sees schools as central to the social and economic life of the area.

“I want to see this neighborhood develop into a fully-formed community,” Carns said. “One that I want to live the rest of my life in.” Carns wants to see the community as one where people want to come to live and play, “not just to work.”

It all adds up to a shared vision of the possibilities for not just a school at the site, but a truly 21st century educational center, said SCUSD Trustee Jim Canova. “It will be transformed with the construction of world-class academic facilities and be a destination for regional park amenities. It is a win-win partnership between the state and local community. Providing excellent schools is an essential part of sustaining economic viability in the heart of Silicon Valley.”

To follow the status of the legislation, visit leginfo.legislature.ca.gov/ and enter “AB 503” in the upper right search box. You can get more information about the proposed SCUSD campus from the 2011 Draft Environmental Report (DEIR) on the project at www.santaclarausd.org/news.cfm?story=82971&school=0.

Open Enrollment Policy Review Slated for Next Board Meeting

At the next SCUSD Board meeting, Trustees will be taking up the often-thorny issue of open enrollment.

In 1994, the state legislation required districts to establish open enrollment policies that met the following requirements:

Open enrollment has long provoked criticism ranging from assertions that some magnet schools cherry-pick students, to criticism that sibling preferences all but shut out everyone who isn’t already attending the school.

In June 2013, the SCUSD board took the unprecedented action of admitting, by fiat, about 75 wait-listed students to Wilcox High School. In the past, these decisions have rested with district administration.

The meeting agenda, including the presentation about open enrollment, is available at www.santaclarausd.org/overview.cfm?subpage=145153. Select Board Meeting Packets.

Community Schools
Author Diane AndrewsPosted on October 27, 2018October 26, 2018
Santa Clara High School senior Ankith Maremanda believes that the human body is a miraculous thing, like a well-oiled machine that responds to the...
SPONSORED