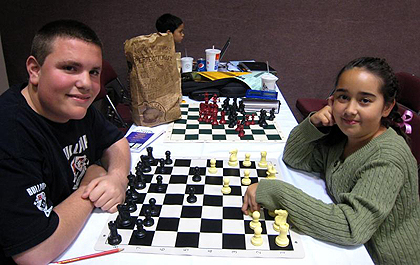 Who wants the glory that comes with announcing “checkmate” at the end of a chess match? Most likely, each of the thousand kids who came from all over northern and central California to compete in the CalChess 2011 State Scholastic Championship wants their moment to shine. The event, held on the first weekend of April at the Santa Clara Convention Center, featured shiny medals and trophies for winners. Still, most kids would admit that the love of the game is a main factor behind their devotion to chess.

One of these kids is Josh Allvin, a senior at Hanford High School in Hanford. Allvin has attended this state championship four times and has won awards at various chess tournaments.

“Chess has taught me that I can do anything if I put my mind to it,” Allvin says. “Years ago, I never thought I could move a piece [on the chess board] but my coach worked with me. It took a lot of practice. Now, I’m pretty good.”

Dakota Kiara Macedo, a fourth grader at Kings River-Hardwick Elementary School in Hanford, compares playing chess to being in battle.

“Chess is very interesting and cool,” Macedo says. “One time, I read a medieval times book about knights, kings, and queens, and I think about [these characters] when I play chess.”

Kids aren’t the only ones who appreciate chess. For Brett Ramirez, a chess club instructor with AcademiCare, his reward comes from seeing the students he coaches having fun.

“I’m also happy that some of them are getting medals and trophies here,” Ramirez says.

“Chess is a game, so there’s a social aspect to it,” Grech says. “Children come to these events to play and build lasting relationships with one another.”

“Playing chess helps children learn quantitative and qualitative analysis,” Wong says. “They learn that by identifying the problem, they can find a solution. I’ve seen chess students with learning disabilities go from getting straight Fs to straight Bs because they learn to sit down and take their time to focus.”

Wong admits that as a child, he wasn’t interested in playing chess, but his parents encouraged him to try it out. Eventually, Wong learned to value the science behind the game.

“I didn’t see the value of playing chess back then, but I do now,” says Wong, who uses the analytical skills he acquired from years of chess playing to run his own software company called ICELounge Media.