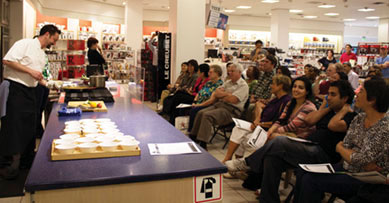 To showcase his culinary skills, Sapirman prepared a paella dish incorporating local, fresh ingredients – something he’s prided himself in doing since taking over the head chef position at the Santana Row hotel.

“Because it’s summer and beautiful vegetables are coming out, what I’ve brought is…heirloom tomatoes. I don’t know if a lot of people know this but there are heirloom squashes too – they all have different textures and different shapes and different flavors as well,” said Sapirman. “So we’re actually going to marry the two. We talk about local and sustainable and these are all actually from the same farm not too far from here.

“Paella, to me, is a great dish because it takes a lot of people to prepare and for summertime it’s great thig – you can have a lot of people come over and everybody takes a part in putting it together,” he continued. “All these components come together and everybody is a part of it. It’s just a great dish. It takes a lot of ingredients to make it but the end result is impeccable – there’s nothing like it.” 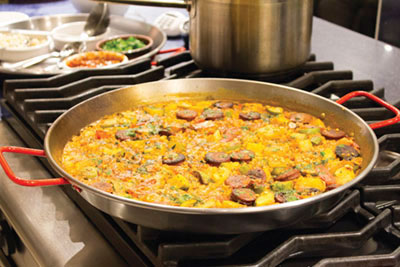 For the demonstration, Sapirman used a locally made chorizo and a variety of spices including smoked Spanish paprika, saffron and sofrito – a base made of onions, garlic and heirloom tomatoes.

Sapriman believes there’s a surefire method to ensuring paella dishes turn out well. “For the first five minutes of doing this, you’re allowed to touch it, move it around, season it and taste it. After that five minutes is up, you basically have to just walk away and let it do its own thing for 11 more minutes. Then after that 11 minutes, you turn it off and let it sit on the stove without doing anything for two more minutes…If you move it during that time, you won’t get the crust…and that’s the best part – that crispy, that crunchy part.”

Community
Author Alissa ReyesPosted on September 27, 2017
Artec 3D specializes in professional portable, handheld 3D scanners, one of their scanners, named Space Spider, is slated to launch into space and help...

Community
Author Melissa McKenziePosted on August 21, 2013
If Brian Boitano were here right now, what would he do? Well, guests attending an event at Macy’s Valley Fair on Aug. 10 got...