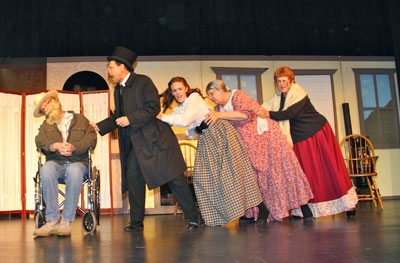 The fun overflowed at last weekend’s 30th annual Showtime fundraiser for senior health services. “The whole thing was well done,” said former Santa Clara Mayor Larry Marsalli, who emceed the first Showtime in 1982. “I see a lot of new faces up there [this year] and that means it’ll keep going another 30 years.”

Turnout was outstanding this year, with the show nearly selling out for all three performances reports longtime showtime fan Judy Busch, who has taken over the reins as Treasurer of the Santa Clara Women’s League, the organization that annually produces Showtime. “We had our largest Friday night ever,” says Busch. “And overall we netted at least $10,000.”

Rick Mauck and Robin Burdick co-produced and directed this year’s reprise of the first Showtime melodrama, “Penelope of Pruneyard Patch.” Long-time Showtime villain and former Santa Clara Police Chief Steve Lodge did the honors as Master of Ceremonies, coaching the audience on its part of the fun.

The melodrama follows the malevolent machinations of Hector Hatefulheart (Rev. Bill Schultz in a role rather different from the one he occupies Sunday mornings at Resurrection Lutheran Church) to evict the honest-but-poor Penningtons – Steve Gustafson and Rosemary Huza, with Linda Sutton getting plenty of laughs as pugnacious Granny Pennington – from the family homestead.

There’s only one way out for them: Young, beautiful Penelope Pennington (Laura Velasco) must agree to marry Hatefulheart.

Just when it looks like Hatefulheart’s diabolical designs will succeed, secret agent Tom Truit (John Petersen), helped by cannery supervisor Tildy Tinsdale (Pam Morrison) saves the day by unraveling all the villainy and restoring the cannery to its rightful owner Sam Snow (Chris DeJesus and his extraordinarily acrobatic voice). Pa Pennington comes out of his coma, handsome Christopher Crabtree (Andrew Hyatt) rescues Penelope from Hatefulheart’s lechery, and as usual, all goes right and romantic until new villains hatch new criminal conspiracies for next year’s show.

The second half of the program featured a rich menu of variety acts. Members of the Showtime cast brought back a 1982 audience favorite, “Honey Bun,” from the Rogers and Hammerstein musical “South Pacific.” The act featured the ladies of Showtime as sailor girls and grass-skirted Andrew Hyatt, Aidan Kline, Rick Mauck, and John Peterson as Santa Clara’s answer to the Chippendales, displaying impressive tassel-twirling talents.

Comedian-magician Phil Ackerly, a Santa Clara favorite, returned with a new version of his signature conjuring act, before he takes his show on the road with stops planned in New York City and Hollywood.

The Town Square Harmonizers charmed the audience with old-time barbershop harmonies, while the Wilcox high school Intercontinental Ballistic Movements and Weapons of Music and Dance took the audience back to the present with their polished hip hop dance. Santa Clara pianist and composer Benjamin Belew gave Showtime audiences a preview of the concert he’ll be giving later this spring.

Soprano Erin Lahm-Simon from Santa Clara’s own Mission City Opera treated the audience to the lyrical “My Every Thought is of You,” from MCO Music Director Michael Taylor’s opera Truce of Carols. Taylor closed the show with what has become a Showtime audience favorite, “Music of the Night,” from Andrew Lloyd Webber’s musical “Phantom of the Opera.”

While there were many familiar faces among the performers, volunteers and audiences, there was one well-loved Santa Clara figure whose presence merits special note: the mother of Showtime, Cleo Stuckrath. A longtime community activist and journalist, Cleo created Showtime to replace funding for senior services cut as a result of Proposition 13.

For 25 years Cleo was Showtime’s playwright, producer, production manager, stage director, set designer, wardrobe mistress, choreographer, and prop master. When poor health forced her to step down a few years ago, Cleo passed the baton to co-producers and directors Robin Burdick and Rick Mauck. “It was a great show,” she told the cast Saturday night. “You’re hired.”

Another familiar and well-loved face, however, was missing this year: longtime Women’s League member Anita Marencia, who died in November 2011. Anita was a cornerstone of Showtime, and among her countless contributions she made all the gift baskets for the event’s silent auction. “Showtime wouldn’t have been what it was without her,” says Showtime director Rick Mauck.

Interested in participating in Showtime? No acting experience is required – all you need is interest and a sense of humor. Call the Santa Clara Senior Center at (408) 615-3170 for more information.

In the interest of full disclosure: Carolyn Schuk appeared in Showtime and, as a 30 year resident of the city, doesn’t deny active interest in promoting this Santa Clara tradition. She can be reached at cschuk@earthlink.net.