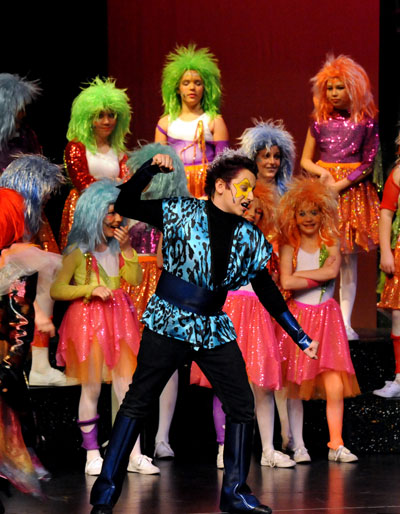 Starmites, nominated for six Tony Awards including Best Musical, came to the Santa Clara High School Performing Arts Center this past weekend for a three-day run. The cast of this fast-paced, sci-fi rock musical, ranged in age from 9 to 13 years old.

But this wasn’t just any production featuring young actors. This was the work of Starting Arts, a theater group that has become well known in Santa Clara and whose name has become synonymous with first-rate performances and outstanding actors – even more so when you consider the youth of the performers.

Starmites featured the work of the Dream Team II, a group of 29 professionally-trained local young actors. First assembled in August 2011, the actors of Dream Team II displayed a cohesiveness working with each other on-stage, which easily belied the brief tenure of the team’s existence. As with the Dream Team, the Dream Team II features actors who, hopefully, will be seen often in future Starting Arts and other groups’ performances. The overall ability demonstrated in the single Starmites performance showcased just how good the Starting Arts program is in developing the skills and talents of young actors.

Directed by Stephanie Renee Maysonave, with musical direction by Amy Baker, and choreography by Megan McGrath, Starmites tells the story of Eleanor, a typical teenage girl, who is fascinated by the exciting possibilities the world her comic books offer. Although her mother pays homage to a B-Movie cult classic, Evil Dead II, by comparing Eleanor’s room to a scene from the movie, she also considers comic books a waste of time and declares she’s sold them on eBay.

Eleanor enters into an alternate comic book world and meets the Starmites, a group of wise-cracking superheroes whose sworn enemy is Shak Graa. They devise a plan to join forces with the Banshees, a group of equally wisecracking, but scary, women, who serve Queen Diva. The only catch is that the Starmites first have to get the Banshees to agree.

The Banshees protect a fearsome weapon, the Cruelty, a stylish guitar that pays homage to the “Rock-n-roll is evil” themes from the movies made before rock-n-roll was considered acceptable. Along the way, Eleanor and the Starmites learn about double-crosses and the meaning of love, but in the end, everything works out and almost everyone lives happily ever after.

At the end of May the Dream Team will present their production of Les Miserables. The troupe recently finished a production of School House Rock at Farnham Elementary School in San Jose. For more information on Starting Arts, please visit their website, www.startingarts.com or call them at 408-492-9022.