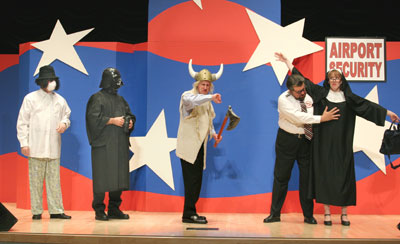 It was a full house last Friday night at Santa Clara University’s Mayer Theater, where inclement weather didn’t do anything to dampen the appetites of the audience for Washington-based political humor troupe, the Capitol Steps. With a portfolio of timely political humor, much of it from the group’s newest collection, “Desperate Housemembers,” these versatile performers doffed costumes and identities more quickly than Mitt Romney can change his health care policy.

In addition to Desperate Housemembers selections including “(And we’ll have) Fun Fun Fun ‘Til Obama Takes Our Tea Bags Away” and “(Welcome to the) Hotel Arizona,” the troupe also added some new inspirations from the current presidential campaign season. They skewered Newt Gingrich with “Three Little Wives of Newt Are We” and “The Merry Wives of Newt,” Herman Cain with “Love Potion Number 9-9-9,” Rick Perry with “Like a Bush Clone Cowboy,” and Mitt Romney with “Help Me Fake it to the Right.”

In this truly equal opportunity evening, no one – Republicans, Democrats, Tea Partiers, U.S. Supreme Court Justices, gays in the military, international trade (“When you buy, buy an American pie/It wasn’t made by grandma it was made in Shanghai”) nor the TSA (especially not the TSA) – escaped Capitol Steps’ musical lampoons.

One of the evening’s highlights was Kevin Corbett’s monologue of “spoonerisms” – comedy that switches the first letters of words, for example “poo tarty system” for “two party system.” Corbett’s dexterity in rapid-firing pair after pair of malapropisms kept the audience howling. “It’s great to have an audience that ‘gets’ the joke,” Capitol Stepper Tracey Stephens says about the Santa Clara audience. “There are places where they don’t get it.”

The show’s closing number, “We Didn’t Start Satire,” (Billy Joel’s “We Didn’t Start the Fire”) took the audience on a three-decade retrospective of political absurdity, with stops at OJ’s glove, Monica’s dress, and hanging chads along the way. All the while reminding us, “It’s not our fault. You elected them.” Too true, alas.

The next show in SCU Presents’ Visiting Artist series is the Stan Kenyon Alumni Band directed by Mike Vax. For information visit www.scupresents.org or call (408) 554-4015.

Enjoy Capitol Steps’ “We Didn’t Start Satire” at www.youtube.com/watch?v=o4zkFDd1tHQ. To find out where to see the Capitol Steps live, or order any of their recordings, visit www.capsteps.com.

Arts & Entertainment
Author Cynthia ChengPosted on March 16, 2011
Abby Mason is with her fiancé’s six year-old daughter at San Francisco’s Ocean Beach when Abby looks away for a moment and the girl...

Arts & Entertainment
Author Melissa McKenziePosted on October 1, 2014
Civilization: Where does it begin and what has been lost in translation? These are the questions explored in Karim Alwali’s new exhibit, “The Civilization...
SPONSORED