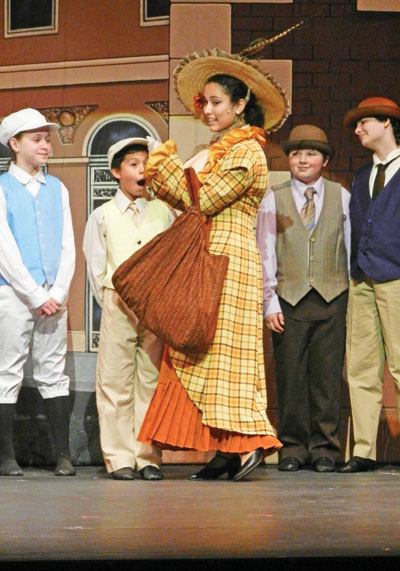 Dolly Gallagher Levi is a woman who knows what she wants. This past weekend, Roberta Jones Junior Theater performed Hello, Dolly!, the musical about the nosy widow and her ability to “know” exactly what everyone around her needs.

With a card promoting services for anything imaginable, Levi (Hannah Brady) meddles with townspeople and doesn’t just want what she feels is best for those around her, Levi wants shopkeeper Horrace Vandergelder (Kiran Grewal).

Through a series of events and musical numbers, Levi eventually professes her desire to wed Vandergelder, but he is so distraught and upset with her meddlesome behavior that he claims he wouldn’t marry her if she were the last woman in the world. Levi bids him adieu with arguably the best musical number of the play, “So Long, Dearie,” and tells him he will remain bored and lonely while she will continue living the high life.

By the time Vandergelder realizes his mistake, Levi is unsure the marriage is a good idea and refuses to accept his desire to be with her until her late husband sends a sign. Vandergelder spontaneously quotes her husband by saying, “Money is like manure. It’s not worth a thing unless it’s spread about, encouraging young things to grow.” He then explains that his life would be dull without her, and the pair end up together.

In their final performances before graduating out of Roberta Jones Junior Theater, Rusty Ravenscraft (Barnaby Tucker), Andrea Uyeda (Irene Molloy), and Brady give the same high-quality performances that are now to be expected of the trio. Ravenscraft is a joy to watch on stage, while Uyeda, as always, impresses when singing in higher octaves. Brady is a delightful Levi, but her performance could be slightly enhanced if she slowed down her speech a bit.

Tickets ($8 for adults and $5 for children) are still available for this weekend and can be purchased through http://santaclaraca.gov/index.aspx?page=239. RJJT next performs Disney’s The Jungle Book Kids in June.

Arts & Entertainment
Author Diane AndrewsPosted on August 22, 2018
Horror movie poster collector James A. Gresham followed the classic road to success. He found a need and filled it — twice. A decade...

Arts & Entertainment
Author Melissa McKenziePosted on August 6, 2014
Over half a century of hats are currently accessorizing the rooms of Santa Clara’s historic Harris-Lass home, breathing additional life into the beautiful Italianate...