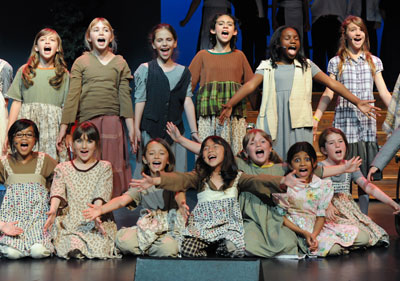 Annie Jr., finished its three-day run at the Santa Clara High School’s Performing Arts Center on Friday, April 27. The latest work of Starting Arts, Annie Jr., almost surprisingly does not involve their Dream Team. “Almost” is a key word as the Dream Team shows are typically first-rate, must-see productions. However, just because the cast of Annie Jr. is not a production Dream Team members is not a reason to expect anything but an excellent show. Produced by Michael Boston and directed by Adrienne Marquette, Annie Jr. is yet another wonderful example of what can happen when a superb program is allowed to work its magic with young actors. In the case of Annie Jr. the actors are 3rd through 8th graders from Easterbrook Discovery School in San Jose. Annie Jr. is yet another production of Santa Clara-based non-profit, Starting Arts, a theater group that is quickly becoming well known in the South Bay for their outstanding work with young performers.

Annie Jr. follows the story of little orphan Annie, who was left in an orphanage by her parents. Annie, played by Rene Mirai Guyon, sings and acts her way into the audiences hearts by actually becoming the girl many of us heard about as we were growing up. Not to be outdone, her dog, Sandy, played by Mackenzie Dawson, tugged at everyone’s heart strings with a cuteness not often seen, especially by actors of this age. Annie decides she wants to escape the orphanage to find her parents, but is caught by Miss Hannigan, played by Nova Moon. As punishment, Hannigan forces all the children to scrub the floors, which serves as an introduction to one of the more spectacular musical numbers, Hard Knock Life. Annie tries again and successfully escapes and finds Sandy. However, she is soon caught and returned, minus Sandy, to the orphanage. With Christmas coming soon, Oliver Warbucks’ assistant, Grace, played by Olivia Figueria, pays a visit to the Hannigan to find an orphan to bring back to the Warbucks’ mansion for the holiday. Through an amusing bit of showmanship, Annie is selected as the orphan.

Once at Warbucks’ mansion, Annie assumes she’s there to clean, only to realize she’s about to find out what the finer life is all about. From the time Annie enters the life of Oliver Warbucks, played by Trey Fitzgerald, nothing is quite the same as Hannigan plots with her brother, Rooster, played by Ryan Sammonds and his ethically challenged girlfriend, Lily, played by Elizabeth Izyumin, to swindle Warbucks out of the $50,000 reward money offered to Annie’s parents. It’s only with the help of President Roosevelt, played by Grady Whelan, that the scheme is stopped and Annie’s life saved.

Even though Annie Jr. has finished its run, there are still chances to see an upcoming Starting Arts performance. Starting on May 31 and running through June 3, Starting Arts will present their production of Les Miserables at the Santa Clara High School Performing Arts Center.

For more information on Starting Arts, please visit their website at: www.StartingArts.com.

Sadness and Rebirth in Poloto's Work at Triton