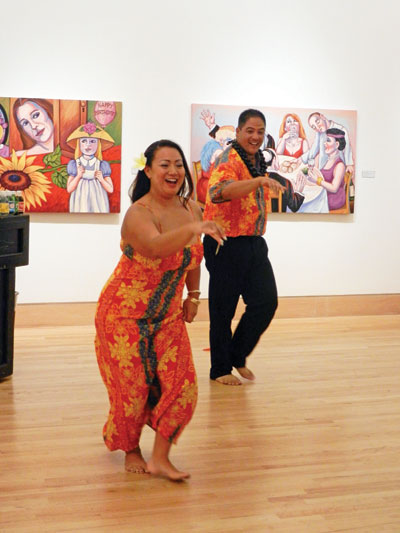 Island fever captured the Triton Museum of Art April 28 as museum patrons were invited to the museum’s annual gala. The “Let’s Catch a Wave at the Triton” event is the largest fundraiser the museum will hold this year.

For $125 per person, gala-goers were encouraged to wear island dressy attire. Island Moves dance troupe greeted each person at the museum door with a welcoming “aloha” and lei.

“Every year, the gala committee, which is headed up by Rosalie Wilson, work with the staff – they choose the theme and all year round they kind of develop it,” said Senior Curator and Executive Director, George Rivera. “This year was kind of the tropical island theme and it’s festive and with the weather it’s just – the timing couldn’t be better. I like to be out front every year just welcoming people.”

After receiving a greeting from Rivera, who wore a Fantasy Island-inspired white suit, attendees dined on theme-appropriate hors d’oevres like shrimp lettuce wraps and skewered ahi and papaya with a coconut sauce. Island Moves also performed traditional hula dances as part of the entertainment.

But the evening wasn’t just about food and hula dancing. Over 100 Bay Area artists donated works for a silent auction. Pieces ranged from mixed media sculptures to fine oil paintings; digital photography prints to abstract art. Regardless of artistic taste, each person could find at least one item to bid on. There were also approximate 20 baskets available for bidding.

“[The baskets have] everything from an autographed 49er football to a condo getaway, restaurants – we got tickets from all kinds of museums throughout the Bay Area – just all kinds of goodies,” said Rivera. “The committee did a fantastic job this year of just getting all these items donated to the museum so hopefully, with the artwork and the baskets, we’ll do quite well so we can do what we do all year round.”

The bidding was simple. Each person was given a number. Upon finding a desired work of art, the bidder wrote their number and bid amount on a card adjacent to the artwork. When the bidding ended, the highest bidder took the card and paid for their newly-acquired artwork. In the event two people were bidding on the same piece at the auction’s close, that piece would go to arbitration, which is what happened with an oil painting by Sandra Jones entitled Contemplation. Moments after Dan States placed his bid of $190, Jessica Shawl bid $220. As Shawl was writing, and before States could counter, the auction ended. To keep it fair, the Triton’s Chief Curator, Preston Metcalf, reopened the bidding for the two parties. After some back and forth, States became the highest bidder and took the painting of a woman in a long dress facing sideways with her knees clutched to her chest and head bowed down home for $310.

Any items not bid on during the active auction were available for purchase at the end of the evening for the minimum requested bid.

The Triton Museum of Art collects and exhibits works with an emphasis on Bay Area artists. The museum is at 1505 Warburton Avenue in Santa Clara and open six days a week. Admission is free.

Arts & Entertainment
Author Larry SacksPosted on November 4, 2015
Murder isn’t the only thing on the menu in Agatha Crusty and the Murder Mystery Dinner, the Santa Clara Players’ latest production that opened...

Arts & Entertainment
Author Carolyn SchukPosted on May 11, 2011
It’s appropriate that an art museum dedicated to innovative contemporary art puts a unique spin on the challenge of raising money. Not only can...
SPONSORED