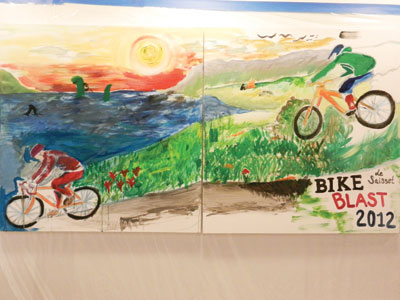 The morning drizzle faded away and the wind died down just in time for Santa Clara University’s first-ever Bike Blast event. Based on the university’s six-year tradition of College Night, the April 26 free event was a way for students to get involved with the school’s de Saisset Museum. This year “College Night” opened to the public due to the appeal of the museum’s current bike-related exhibits.

“Bike Blast is an event that [the de Saisset Museum] put together,” said Lindsey Kouvaris, Curator of Exhibits and Collections. “It’s based on an event that we do twice a year called College Night, which originated as a way to get students involved and to come have a really fantastic and entertaining time.”

“This time, the nature of the exhibitions and the wide-appeal of bikes was the main impetus for deciding that we should open the event officially to the public,” continued Kouvaris.

The event kicked off with three professional bike riders, Omar Romero, Shelby Paget, and Kelly McGarry performing bike stunts on the street outside of the museum. After the bikers performed all of the flips and tricks they could possibly do in the limited space, everyone was encouraged to head inside the museum where the event took place.

Attendees dined on pita chips with Mediterranean spreads, garlic and pesto chicken rolls, pizza squares, black bean and corn quesadillas, and fudge brownies, while adorning their bodies with felt tip pen tattoos provided by seniors Julia Detweiler and Melina Ramirez, and getting photos taken with friends in the photo booth.

Austin & the Pigeons and Exit 11, two bands formulated of current and past SCU students, provided the evening’s live entertainment while attendees were given the opportunity to participate in the community art project, a drawing done by Detweiler and junior Lauren Walters.

Those at the event were also encouraged to take part in the scavenger hunt. For the scavenger hunt, SCU compiled 12 images of various pieces of the Chain Reaction: Artists Consider the Bicycle and Clunkers to MTBs: The Evolution of the Mountain Bike exhibits and asked attendees to find the artist (or company maker of the bike) and title of the piece. Owners of correctly filled out entries were given a raffle ticket, entitling them the chance to win a Fox Shox Fork for a bike, $500 to the Fox Racing store at Valley Fair, a Roku player, one of two signed posters by Bob Fox, iTunes gift cards, and SCU flex dollars to spend on campus.

Kouvaris stated the event typically receives between 350 and 450 students but hoped that because of the wide appeal of the exhibits and the fact it was a community event, around 500 people would show up to Bike Blast.

As the evening wound down, and all the prizes were given away, the mural was completely painted and Kouvaris and her student crew were able to rest easy knowing they had put on a successful event.

Clunkers to MTBs: The Evolution of the Mountain Bike and Chain Reaction: Artists Consider the Bicycle run through July 1. The de Saisset Museum is located on the Santa Clara University campus at 500 El Camino Real in Santa Clara. Additional information can be found at www.scu.edu/desaisset.

Sadness and Rebirth in Poloto's Work at Triton