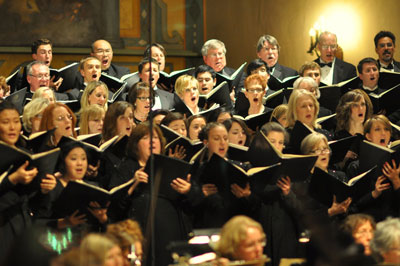 Santa Clara Chorale’s 50th anniversary grand finale concert began with trumpet fanfare and ended with a standing ovation after the chorale’s powerful performance of the Carmina Burana May 4 at Mission Santa Clara.

The chorale was joined by the Santa Clara University Concert Choir and accompanied by Symphony Silicon Valley for the once-in-a-lifetime opportunity to hear the chorale perform under the direction of all four of the artistic directors it has had since its beginning in 1962. Present Artistic Director Dr. Ryan J. Brandau orchestrated the celebration, which sold out at 650 people.

“Ryan has done a brilliant job. He is a brilliant conductor, and the chorale’s skills have grown under his leadership,” says Thomas Colohan, artistic director from 2002 to 2009. “The chorale is a jewel. It enriches the lives of people in the South Bay community.” Colohan travelled from Washington, D.C., for the gala.

Brandau opened the concert with Aaron Copland’s 1942 brass and percussion instrumental “Fanfare for the Common Man.” Then Colohan directed Johannes Brahms’ “Schicksalslied,” completing the short first half of the concert.

The Carmina Burana, a three-part cantata by German composer Carl Orff, made up the second half. The lusty, sometimes bawdy, secular cantata, written in medieval Latin and middle high German, is based on 24 medieval poems about wine, women, song, and love.

“1967 was the first time the Mission allowed a concert to be performed, and we had to convince leaders of the church and Mission that we’d honor this sacred space. The first piece we did was Cherubini’s Requiem Mass written in 1815,” recalls Wilson, who now lives in Arizona. Only music considered sacred was performed during his time as director from 1962 to 1969.

Lynn Shurtleff, who travelled from his home in Montevideo, Uruguay, directed Part II of the Carmina Burana. He was director from 1969 to 2001—32 years.

“The chorale took the majority of its foreign tours during that time—ten tours. We had grand experiences singing with some of the great orchestras of the world, Moscow to Vienna,” Shurtleff reminisces. The chorale travels to Uruguay and Argentina this June.

“The concert was so overwhelming, musically, emotionally, and historically. Everyone performed magnificently. It’s always a pleasure to work with the Symphony Silicon Valley and to hear the beautiful way the voices of the Chorale and the Santa Clara University choirs combine,” says Brandau in an e-mail.

“The physical manifestation of the Chorale’s history, in the presence of the four directors and so many past members of the group, created a very special connection between everyone performing and everyone listening. It was a joy to perform for so many people to whom the Chorale has meant so much,” concludes Brandau.

“Friday night was so exciting. All the directors were so easy to follow, and everybody was very pleased,” says Santa Claran Isabelle Wright, who has sung with the nonprofit chorale for almost all of its fifty years.

“Music is my joy and I feel like this group is my family,” says Wright. Santa Clara Chorale’s 50th anniversary concert and family reunion included former singers who traveled from Sacramento, southern California, Utah, Minnesota, Wisconsin, Florida, Texas, and Hawaii.

“It’s like my child has grown up into a wonderful, thriving organization—a rich, cultural treasure for the community,” says chorale founder Wilson.

All Aboard for Bluegrass Jamming at Santa Clara Caltrain Station