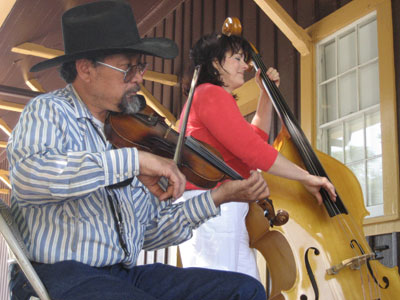 Five bluegrass musicians are jamming outside on the shady end of the wood deck of the Santa Clara Caltrain station.

“Every town I wander around, there’s more pretty girls than one,” sings Peter Forrest, strumming a guitar. The others join in on the banjo, mandolin, upright bass, and fiddle.

“It’s original music. They’re really jamming, just doing it for themselves for fun. They’re very relaxed and having a good time,” says Michael, listening to the music with his wife, Mika, and children, Alyssa and Aiden. The young family from San Jose timed their visit to the Railroad Museum to include the free bluegrass jam held noon to 3 p.m. the second Saturday of every month.

“I like the music. For a moment we forgot that we are in Silicon Valley. And the kids are enjoying it, too,” says Mika while encouraging her children to dance to the music.

“Bluegrass is 100% American music, people’s music. It’s satisfying to sing and play it,” says Mary Kennedy, who started the group about a year and a half ago. “We want to expose people in Santa Clara, especially young kids, to this family-friendly music.”

Because the instrumentalists are jamming at the train station, their repertoire includes songs such as “Wabash Cannonball,” “Railway to Heaven,” and “The Wreck of the Old ’97.”

“Not a lot of bluegrass songs with trains in them end very well,” comments Forrest.

When it’s his turn to solo, mandolin player John Cooper leads the jammers in an old Irish tune from the movie “The Quiet Man” with John Wayne.

“You never hear people play the fiddle anymore,” says Randy Wiesendanger, switching back and forth between his fiddle and guitar in the same song.

“I learned to play in case the computer business fails,” jokes Chuck Kennedy, who plays upright bass and guitar.

“If you’re a jammer, the more instruments you can play, the more chances you have to play,” says Mary, who plays mandolin and bass.

“I do this for the fun and camaraderie,” says Jerry Friedman, who plays a five-string banjo and 12-string guitar. “Everyone has an open invitation to come and play with us or listen.”

“When the weather is nice like this, it’s wonderful to sit and listen,” says long-time Santa Claran Bernhard Henschke. “If I can, I sing along.”

“Bluegrass is a very social kind of music,” says Mary. “Some people start jamming in their 40s and 50s. Then they have something to do when they retire. Some buy RVs and follow festivals all over the country.”

“Some famous musicians play into their 90s. Music engages the mind, heart, and body and creates social bonds that last a lifetime,” she says. “It’s a healthy social activity.”

“I do it to pick up chicks,” says Forrest, wondering what his wife will make of his comment.

The instrumentalists are members of the Northern California Bluegrass Society (www.scbs.org), which includes bluegrass musicians of various skill levels from Marin to Monterey.

E-mail Mary Kennedy for information at bluegrasstrain@gmail.com. Or just drop by the Caltrain station with or without a string instrument, grab a chair from inside, and enjoy the ambiance. All aboard!

A Nerd with a Twist

Arts & Entertainment
Author Diane AndrewsPosted on November 6, 2013
“The concert far surpassed what I expected. It was surprisingly lively and vibrant,” says Dale Bracey of Los Gatos, attending a Santa Clara Chorale...
Arts & Entertainment
Author AdminPosted on July 16, 2014
It was a standing-room only crowd at the first-ever Triton Friday performance on June 6. The evening’s performace was Mission Chamber Orchestra, under the...