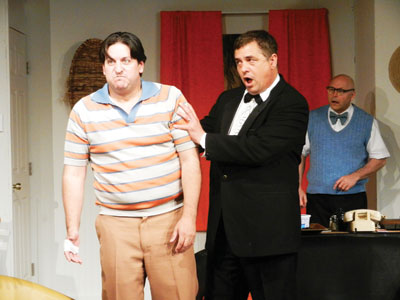 On the night of Willum Cubbert’s (Mark Flores) birthday, he receives a visitor. A man he had never seen, but a man he feels forever indebted to. Enter Steadman. Rick Steadman (Bruce Blau) – an Army man who saved Cubbert’s life in Vietnam.

As viewers watch the Santa Clara Players act out Larry Shue’s The Nerd, it’s difficult to comprehend how such a whiney, socially awkward man like Steadman made it past boot camp, let alone managed to save someone’s life during battle. But, despite Steadman’s inability to fit in, Cubbert appeases the man by doing everything possible to make him feel at home, even playing Steadman’s bizarre Socks and Shoes game.

Over the course of the two-act play, theater lovers meet Cubbert’s friends, Axel Hammond (Bill Dahl) and Tansy McGinnis (Kateri Rose), as well as Cubbert’s employer, businessman Warnock Waldgrave (Jose Spenser) and his wife Clelia (Sandi Wolfe). They are also introduced to their child, Thor (London Doeltz) who, according to Hammond, “is the poster child for Planned Parenthood.”

As Cubbert deals with Waldgrave’s dislike of his architectural design, his unrequited love for McGinnis, and his good “friend” Hammond, he forces himself to put up with Steadman’s odd quirks like singing the Star Spangled Banner with an accompanying tambourine.

It takes exactly one week for Cubbert to feel as if he’s lost it. At one point he practices a “going away” speech to Steadman, which includes the line, “There’s a chemistry between you and me that makes me want to rip your face off.” Yet, despite a feeling of hopelessness, Cubbert grins and bears every one of Steadman’s inappropriate behaviors. But, with McGinnis moving to Washington, DC, and the feeling of despair over his stifling boss, Cubbert calls upon Hammond to devise a sure-fire way to rid himself of his now permanent guest.

What neither man planned on was that Steadman would play into the scheme and actually enjoy being part of their odd and invented Terre Haute rituals. There seems to be no way to lose the loser. However, the only way to know how it all ends is to visit the Triton Museum Hall Pavilion and watch the Players play out Shue’s comedic stage show.

The acting is on par with what is expected from the community group and Rose is becoming somewhat of a favorite on the SC Players’ stage. Most recently seen as Margo in Dial “M” for Murder and Alice in Squabbles, Rose plays a delightful McGinnis, complete with her animated expressions.

Flores, who last portrayed Hector in Squabbles, has moved into the limelight with his portrayal of the far too nice and accommodating Cubbert.

Blau, in his second Players appearance, masterfully executes his role of Steadman.

But, the real standout is Dahl. In his first performance with the group, Dahl sells his role as a concerned friend and conniving scoundrel. As the minor kinks get worked out over the course of The Nerd’s run, look for Dahl to become the real star of the show.

The Nerd runs through June 3 with Friday and Saturday performances at 8 p.m. and Sunday matinees at 2:30 p.m. Tickets and additional information are available at www.scplayers.org.