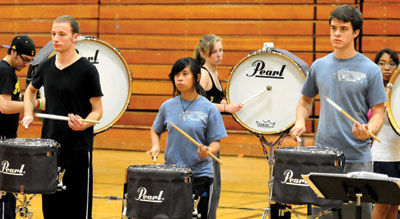 For those who have never seen the Santa Clara Vanguard (SCV) perform, saying it is a drum and bugle corps, or labeling it as a marching band, doesn’t really help define how the band comes about in the first place. While SCV is a perennial winner, behind the scenes show just how much work and effort goes into helping keep its tradition alive.

Over the weekend of January 13 – 15, SCV held a Vanguard Brass & Percussion Camp, also known as a call back camp, at Woodside High School in Woodside, California. To say the hills were alive with music doesn’t do justice to what took place. Thankfully, the clear, dry weather allowed the camp to utilize the football fields and other outdoor areas of the school, along with the gymnasium. This was another step in the process of bringing together what will be the Vanguard for the 2012 summer season. In all, 90 brass (horns, trumpets, tubas, bugles, etc.) and 55 percussion (drums, xylophones, etc.) players came to Woodside to see who would be selected for the brass and percussion sections, as well as to rank the alternate spots and to continue learning with the Santa Clara Drum and Bugle Corps. SCV is so popular that musicians from not only around the United States but also from countries around the world, including England and Japan, all vie for their chance to be selected. But, as with any competition, not everyone can be selected. Only 76 brass and 34 percussion players were chosen. The competition to be selected is not an overnight or even a one- or two-day process. Beginning in November 2011, SCV held four auditions, two in Texas and two in California. Texas was chosen mostly because the greatest number of kids, who are from outside California, are from Texas.

According to Jeff Fiedler, Chief Executive Officer for SCV, “…those (selected) will attend a camp King’s Academy in Sunnyvale where the brass and percussion sections will learn more music and they’ll begin to put it all together on Saturday morning to make sure all the notes match up. Then, at the end of March is a camp where they’ll start learning the drill for this summer. Eventually they start doing the drill and music together.”

In May, all the work and effort comes together as the participants go to Fresno State University for the beginning of a four-week push that sees the band move from Fresno to the College of the Siskeyous in Weed for two weeks, and finally to location in Gold Country.

This area will see SCV perform on several different occasions including June 23 at Stanford University. “Stanford is huge – easily it’s the biggest show on the west coast and then three days later, we’ll be at Santa Clara High School. The City and the Santa Clara Unified School District are all behind it – it’ll be our 45th birthday and will be a really good competition – the first time in 20 years the Corps has had a competition in Santa Clara. For more information visit Vanguard’s website www.scvanguard.org.

As Time Goes By and Valentine's Day Approaches

Community
Author Diane AndrewsPosted on October 19, 2018
Santa Clara resident Yuki Ikezi is among the first to take advantage of a new City ordinance that facilitates the process of adding an...

Community
Author Diane AndrewsPosted on October 8, 2014
All life is sacred to Native Americans such as the Ohlone Indians of California, who once inhabited the Santa Clara Valley; including that on...