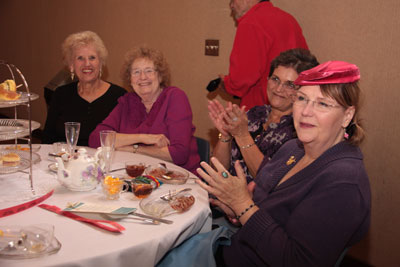 Lively conversation filled the Santa Clara Senior Center on the afternoon of January 21. Trays of sandwiches and scones sat on top of round tables covered with white tablecloths. The Mission City Symphonic String Quartet performed soothing music up on stage. Ladies dropped their raffle tickets in dishes next to the prize baskets they hoped to win. Such was the swanky atmosphere of the Santa Clara Sister Cities Association’s second annual fundraiser tea.

“This event is nice and wonderful,” says Elizabeth Barron, an attendee of the tea. “The food is delicious, and it’s a wonderful turnout for the Sister Cities fundraiser.”

“This is our most elegant fundraiser of the year,” says Debi Davis, president of the Santa Clara Sister Cities Association. Davis adds that she is grateful for the raffle donations provided by various organizations, such as Mariani’s Restaurant.

The announcement of the raffle winners was one of the highlights of the afternoon. Prizes included a vase of roses, bath and body products, Mary Kay products, stationery, tickets to the movie theater along with a voucher for popcorn, and a comforter. After the raffle winners claimed their prize baskets, Davis announced the live auction for a football autographed by San Francisco 49ers coach Jim Harbaugh. The starting bid was $75. Bids and counter bids were offered, and a happy winner walked away with a $550 football.

Attendees at the tea also enjoyed food and beverages. Not only did each table come with a pot of spiced black tea with cinnamon and orange, the more adventurous attendees could purchase glasses of sparkling Italian wine at the wine bar off to the side. Two chocolate fountains were accompanied by plates of chopped pineapple, kiwi, banana, and cookies. At each table were varieties of munchables, such as pineapple and carrot sandwiches, chicken salad puffs, roasted turkey and cranberry sauce sliders, and lemon scones.

The delicious sandwiches were prepared by Brenda Manley with the help of members in the Sister Cities Youth Commission. A graduate of the California Culinary Academy Le Cordon Bleu program, Manley has been in the food industry for over 20 years. She was happy to volunteer her food preparation services for the tea.

“Sister Cities is a great organization to volunteer for,” Manley says. “I like food to be wholesome and good, local and fresh. And you get a lot of that here in the valley. I like to see people happy and enjoying themselves [while eating my food].”

One of the many people who enjoyed Manley’s food and the festivities of the tea was Peg Horrillo, who sat at a table with her fellow members from the Santa Clara Woman’s Club.

“Today was nice,” Horrillo says. “I love the food and I overate, as usual. I also won the first basket. So I’m very happy and content right now.”