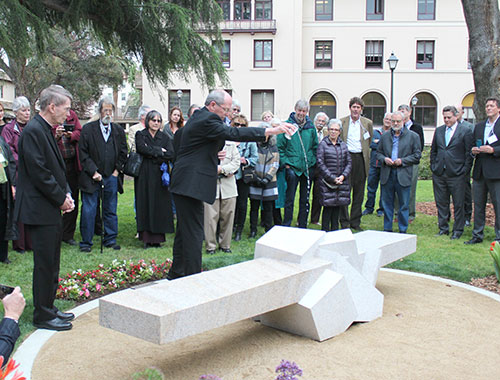 “Three decades ago, our relationship began when [Paula] entrusted the de Saisset Museum with the Smith Andersen Editions Archive representing some of the most important California artists of our time,” said Rebecca Schapp, director of the de Saisset Museum. “Today the archive holds 210 works of art created at [her printmaking press] in addition to over 200 works of art that Paula and [her late husband] Phillip directly donated or facilitated in the donation of to our museum. But more importantly, we miss her laughs, her unique perspectives, her temperamental outbursts, her storytelling moments, her dabbles of blue, red, green or purple in her hair and the precious times we spent together.”

“The idea of a bench was to have a sculpture not just to look at but to sit on and think,” said artist Bruce Beasley, who designed the new bench. “It took me about three months to make the bench. I carved the bench from one block of granite. I’ve known Paula for at least 45 years.”

“It’s one of those types of decisions a person makes to become an artist and sometimes you can be unsure,” Peter Kirkeby said. “I think my mother did a lot to assure artists so we should all be grateful for that.”

“For me, it’s been such a big thing to understand generosity,” Stefan Kirkeby said. “I’ve never seen such generosity come from many people in my life as much as my parents.”

“To the museum, to everybody at Santa Clara University, to family and friends, artists, everybody, really we are very grateful and very appreciative of all the support in the memory of our mother,” Kaplan said.

“Paula herself was not a practicing artist,” said Lauren Baines, assistant director of the de Saisset Museum. “She had a space that was a gallery. It was known as the Smith Andersen Gallery. It was a gallery space where Paula and Phillip and their team exhibited artists’ work. But it also had a work space and a studio space for artists. In this space, Paula would invite artists to come and work here.”

“Unique and Multiple,” featuring about 40 prints and paintings, will be on view at the de Saisset Museum through June 17. On May 17 at 7 p.m., Conway will facilitate an artist lecture with Kathryn Kain and Kara Maria, artists participating in the exhibition.

The de Saisset Museum is on the Santa Clara University campus, adjacent to the Mission Church. Visit scu.edu/desaisset for details about museum hours and directions.

The Art of Wonder: Triton ArtTours for Schools