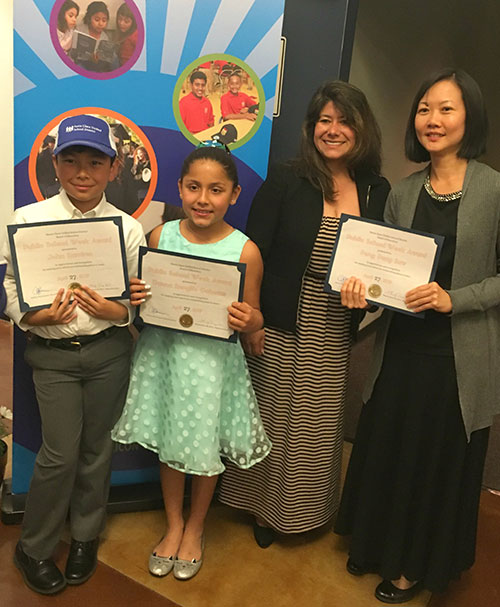 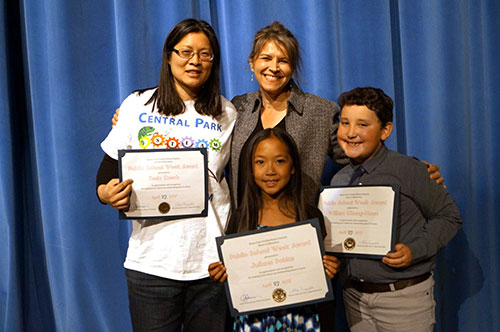 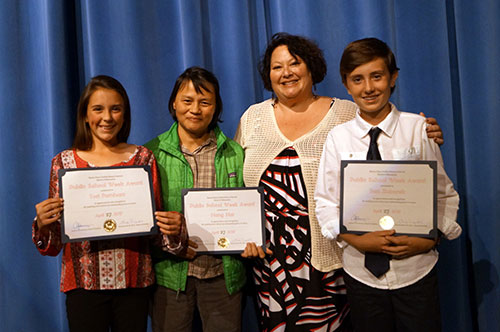 “Central Park School doesn’t get any more money than other schools in the district so I spent a lot of time writing grant applications for iPads and robotics equipment,” said Tesin Dosch, parent volunteer at Central Park Elementary School, sharing advice about grant writing. “Out of every grant we won, there were about 30 we didn’t win. It’s a lot of paperwork but try not to get discouraged.”

Dosch managed to score several grants for the newly opened Central Park Elementary School, where her twin daughters are finishing second grade. On April 27, Dosch and other outstanding parent and student volunteers from the Santa Clara Unified School District (SCUSD) were formally recognized at the Public School Week Awards ceremony held at the Santa Clara High School Theatre. Each honoree received a certificate and a baseball cap featuring SCUSD.

“Each year, two student volunteers and one adult volunteer are nominated by their school sites based on their significant volunteer efforts, on and off campus, over the course of the school year,” said in a press release from SCUSD. “Only 50 out of over 15,300 students and 25 adult volunteers out of almost 13,000 families in the district receive this award each year, making it a highly prestigious achievement.”

Although Santa Clara High School parent Jennifer Whitten wasn’t able to attend the award ceremony, she was still tickled to be recognized. This mother of two daughters–one, a high school senior and the other, a college sophomore–encourages other parents to get involved in their children’s schools.

“I am on the PTSA as the committee chairman for events so I organize the staff appreciation luncheons, I help execute the freshman welcome barbeque. I’m also on the grad night committee,” Whitten said. “I’m also involved in the Music Boosters group as the choir mom. I help fit all the students in their uniforms for the concerts and make sure all those uniforms are altered to the students’ sizes and that the costumes are cleaned and steamed after concerts. I have a group of four parents who help me. I also do the same for the winter guard program.”

From George Mayne Elementary School, John Ramirez, 10, learned he was going to be honored when his teacher Leslie Code presented his invitation. This fourth grade student credited his friend Crystal for coming up with the idea to sell goodie-grams to raise money for kids with cancer at St. Jude Children’s Research Hospital.

“Inside the goodie-grams were pencils, candy and erasers,” Ramirez said. “Our goal for the fundraiser was to raise $1,000 and we made close to that which was $857. Each goodie-gram cost $1. When it was a rainy day, we sold them classroom to classroom. Otherwise at recess we would be outside selling them.”