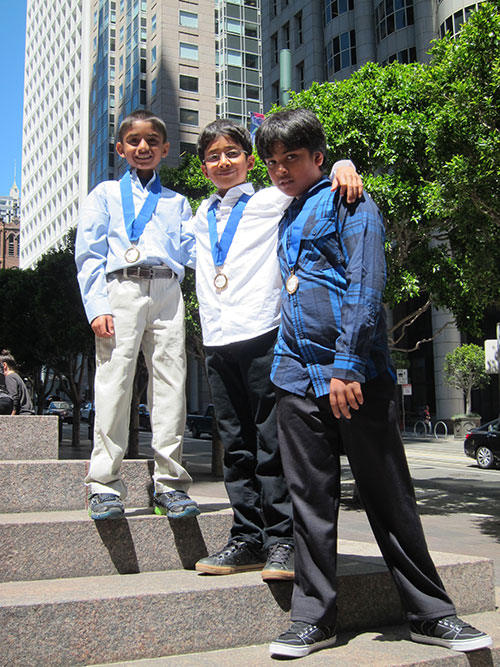 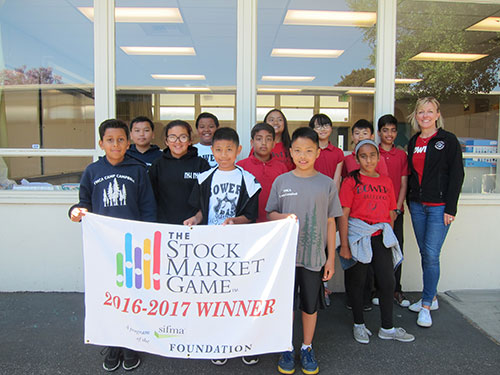 The Stock Market Game is a national education effort that allows youngsters to invest a hypothetical $100,000 portfolio like a grown-up–selecting real stocks to buy and sell, paying trading fees and enjoying (or suffering) the consequences of their decisions.

Millikin Basics+ Elementary School won prizes for taking first place in the 10–week game at a ceremony held at the Giannini Auditorium in the San Francisco Bank of America headquarters on May 19. Bowers Elementary School students took first, second and third place in the 12-week spring game and Principal Lisa Blanc handed out certificates to the winning teams on June 2 at a school victory party.

The mission of the Stock Market Game is to build a fundamental understanding of investing while providing students with real-world skills and practice in math, English language arts, economics and social studies.

“We didn’t know a lot when we started, but we used Warren Buffett’s rule to ‘buy what you know’ to figure out what we would invest in,” said Millikin student Kalkunte.

Millikin student Mittal said his team also watched the news to determine what their investments would be. “We learned that we had to invest in stocks like Tesla because it went up after the big speech that Tesla’s CEO made,” he said.

During the after school programs students learned to focus their investing on: buying what they knew–a philosophy they got from Warren Buffett; doing their homework–students researched their stocks, reading articles and past performance charts to determine how the stock had been doing in the last six months prior to their investment; trading sparingly–another Buffett’s strategy; and diversifying–don’t put all their money in one industry.

Students also discussed bonds and mutual funds, and were introduced to the 401K and what those programs include.

“I really liked working with the students on my team and learning what a stock is,” said Millikin student Sabari.

The nation-wide program was introduced in the 1970s and is sponsored locally by: SIFMA-Securities Industry and Financial Markets Association, the Bay Area Financial Education Foundation and The NASDAQ Educational Foundation.

Chic is the Word at Wilcox Student Fashion Show