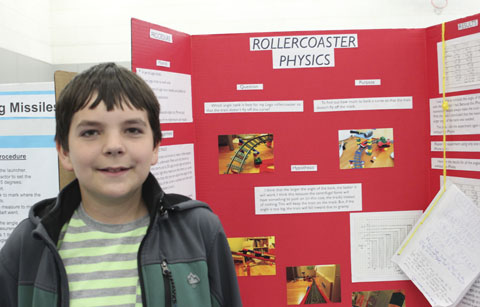 At the second annual Santa Clara Unified Parents Science Fair held at Wilcox High School on May 15, about 50 parent volunteers helped out, 45 community members judged, and 320 students from the school district showed their work. Participants received either a blue, red, or white ribbon, with the blue ribbon being the highest form of recognition.

Arthur Reyes, a fourth grade student at Montague Elementary School, received a blue ribbon for his project on deciphering which type of beans have the best rate of absorption after being soaked.

“After I weighed and strained the beans, I put the beans on paper towels and dried them and weighed them again,” Reyes says. “The black beans weighed the least, but had the best rate of absorption.”

Sarah Yum, a fourth grade student at Briarwood Elementary School, received a red ribbon for her study of the most ideal liquid that would help a white buttercream rose survive for the longest period of time.

“I [hypothesized] the rose would grow in milk the best, and in oil the least,” Yum says. “I was right about oil being the worst environment for a rose, but it turns out that water, not milk, is really the best place for a rose.”

“I [considered] the weight of the car, and learned that the larger the angle of the bank is, the better this would work,” Salinas says.