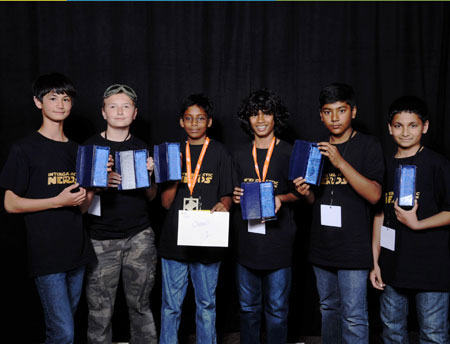 “Last year, my son came home from school and gave me a flier from his science teacher announcing the Tech Challenge [hosted by The Tech Museum],” says Amit Saha, a resident of Santa Clara and product manager at Symantec. “My son, Anish, wondered if he should do this. I said, ‘let’s do it,’ and that’s how I became a mentor [to him and his team].”

Last year, Anish and five of his friends, all students at Millikin Basics+ Elementary School, entered the Tech Challenge and won second place in the 5th-6th grade division. The boys have since graduated from Millikin and are now 6th graders in middle school. Though not all of them attend the same school, they remain friends and reunited to enter the competition again. At the event on April 20 Anish and his team won the grand prize for the 5th-6th grade division for their support of the 2013 theme, Asteroids Rock.

The students designed and created the devices as well as the catapult to launch them.

“The devices that we used were triangular pyramids made out of grass, rock, and cable,” says Thomas Panasyuk, a student at Peterson Middle School. “The three devices successfully landed on the three terrains in 46 seconds.”

“We based the design of our catapult on the medieval catapult,” says Shone Patil, a student at Peterson Middle School. “Our idea was based off that because it’s a very consistent design. You can hit the target again and again.”

“We did not use mathematical equations, but we used trial and error,” says Anish, a student at Magnolia Science Academy. “We used angles from geometry. We also used physics.”

The boys shared that when the prizes were initially announced, they didn’t hear their team’s name. But the announcers saved the best for last. The final winning team announced was also the grand prize winner. So when the boys heard the name of their team, InterGalectic Nerds, they were over the moon with joy. Each team member received a Google Chromebook and crystal plaque.

“The most important thing for us to have was not science or math skills, but teamwork,” says Tyler McNierney, a student at Peterson Middle School. “If you have high skills in science or math, but you don’t have teamwork skills, then I don’t think you will have as much success as a team who has teamwork.”

“I would like to wish everyone doing this next year good luck,” says Aditya Chinta, a student at Peterson Middle School. “They’re opening this up to kindergarteners to fourth graders next year, and I hope to see them [do this]. This is a fun challenge.”