The Police Blotter highlights a partial list of incidents in the city and is distributed on a weekly basis. The Blotter provides the date, time, approximate location, a narrative summary of the incident, case number and the most serious arrest charge.

Meanwhile, the Arrest Log provides a timely, chronological summary of all the arrests made by the Santa Clara Police Department. It includes the name of the suspect(s), date of birth, city in which they reside, arrest date, time, location, case number as well as all of the charge(s) associated with the arrest. This information, located on the Santa Clara Police Department’s home page (www.scpd.org), is updated daily and serves as the most comprehensive list of arrests made.

A female subject selected and concealed several items from a business on the 2000 block of El Camino Real. The subject utilized self-check-out and left the store without paying for several items. The subject was approached by a Loss Prevention Specialist.

Public Safety Dispatchers were contacted, and an officer responded. The subject was arrested. The items were valued at $148.29.

Officers were dispatched to a report of an accident at Stevens Creek Boulevard and Winchester Boulevard. Upon arrival, officers found a pedestrian, not in a crosswalk, struck by a vehicle. The pedestrian was transported to a local hospital for medical evaluation.

A male subject entered a business dressed as a medical professional (e.g. scrubs, identification card, etc.) and asked to use the restroom facilities. While in the business, the subject accessed an unlocked office and stole an employee’s wallet. Less than 30 minutes later, the credit cards were used illegally. The subject is unknown and remains at large.

The victim left the residence for approximately 1.5 hours. During that timeframe, an unknown suspect(s) forcibly removed a window screen, broke the blinds and stole a cell phone. The suspect(s) remain at large and unidentified. 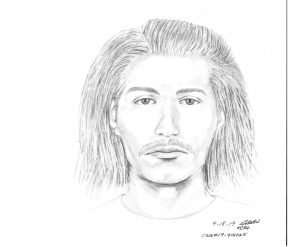 The Santa Clara Police Department is asking for the public’s help regarding an unprovoked and ruthless attack on a vulnerable member of our community.

On Saturday, Sept. 14, 2019 at about 10:42 a.m., a 91-year-old male victim was visiting his late wife’s gravesite at the Mission City Memorial Park cemetery, 420 N. Winchester Blvd., when a male suspect struck the victim on the head from behind with a large rock. The suspect took property from the victim and fled the scene on foot before getting on a bicycle.

The victim was transported to a local hospital for treatment.

Officers conducted an area canvass for the suspect without success. The suspect was described as possibly a Hispanic or Latino male, 35-50-year-old, approximately 5’9” to 6’0” tall with a medium build. He had grey slicked-back hair, a grey moustache, and was wearing a white t-shirt with long black shorts. He was last seen riding a grey and black mountain bike.

A composite sketch of the suspect was developed and is attached below.

This incident appears to be an isolated one, and the Police Department encourages the public to report any suspicious activity at the cemetery as well as other public places.

An officer observed a vehicle traveling Stevens Creek Boulevard with its reflective paint on the rear license plate scrapped off. A DMV registration check of the vehicle revealed the registration was expired. The officer initiated a traffic enforcement stop.

The officer contacted the male subject. A Records check revealed the subject had a suspended driver’s license. A consent search of the vehicle yielded a controlled substance. The subject was arrested, and his vehicle was towed.

This is the first Friday of the academic year at Santa Clara University. Multiple calls for service were received in connection with the college students. The parties were disseminated, and warnings were issued.

The Neighborhood-University Relations Committee was established in 1990 and created a forum for on-going communication and problem solving among City officials, neighborhoods, property owners and Santa Clara University officials and students. The next Neighborhood-University Relations Committee meeting is tentatively scheduled for Oct. 21, from 7 – 8:30 p.m. at Santa Clara University, Schott Admission Building room 406, at 500 El Camino Real. For more information, log onto http://santaclaraca.gov/government/committees/city-committees/neighborhood-university-relations-committee-nurc

Driving Under the Influence

An officer observed a vehicle without a front license plate in a parking lot occupied by two subjects, one male and one female. The male driver exited the parking lot onto southbound Bascom Avenue. The officer conducted a DMV registration check and Public Safety Dispatchers advised the registration did not match any registered vehicles for the license plate. The vehicle yielded on N Bascom Avenue and Redbush Terrace in San Jose.

As the officer was approaching the vehicle, the driver exchanged seats with the female passenger. The driver displayed objective symptoms of being under the influence of alcohol and refused to provide a blood or breath sample. A Records check revealed the subject was on two counts of probation. A search of the vehicle yielded an open container of alcohol. He was arrested and transported to the Santa Clara County Jail.

The female subject was released at the scene.

NOTE: After a 24-year hiatus, the historic Santa Clara Parade of Champions was held in Santa Clara. There were several street closures as a result.