Santa Clara Police are looking for the public’s help after an “unprovoked and ruthless” attack on an elderly man at Mission City Memorial Park.

“I would like to challenge the public to assist us in identifying and locating the suspect in this case,” said Santa Clara Police Department (SCPD) Captain Wahid Kazem. “This is a ruthless and unprovoked attack on one of the most vulnerable members of our community.”

It happened at 10:42 a.m. on Saturday, Sept. 14. Police say the 91-year-old man was visiting his late wife’s gravesite, something he does frequently, when he was hit in the back of the head with a large rock. He was robbed.

The man was taken to the hospital and has been released.

“He has since been released from the hospital, but given his age…” said Kazem. “This is not only an emotionally traumatic event to go through, but this is a physically traumatic event to go through for someone who could have been half of his age, but given his age, this is significant and we hope and we pray for his well being and his full recovery.”

Witnesses were nearby and were able to come to his aid. They also worked with police on a description of the attacker and helped officers come up with a sketch. 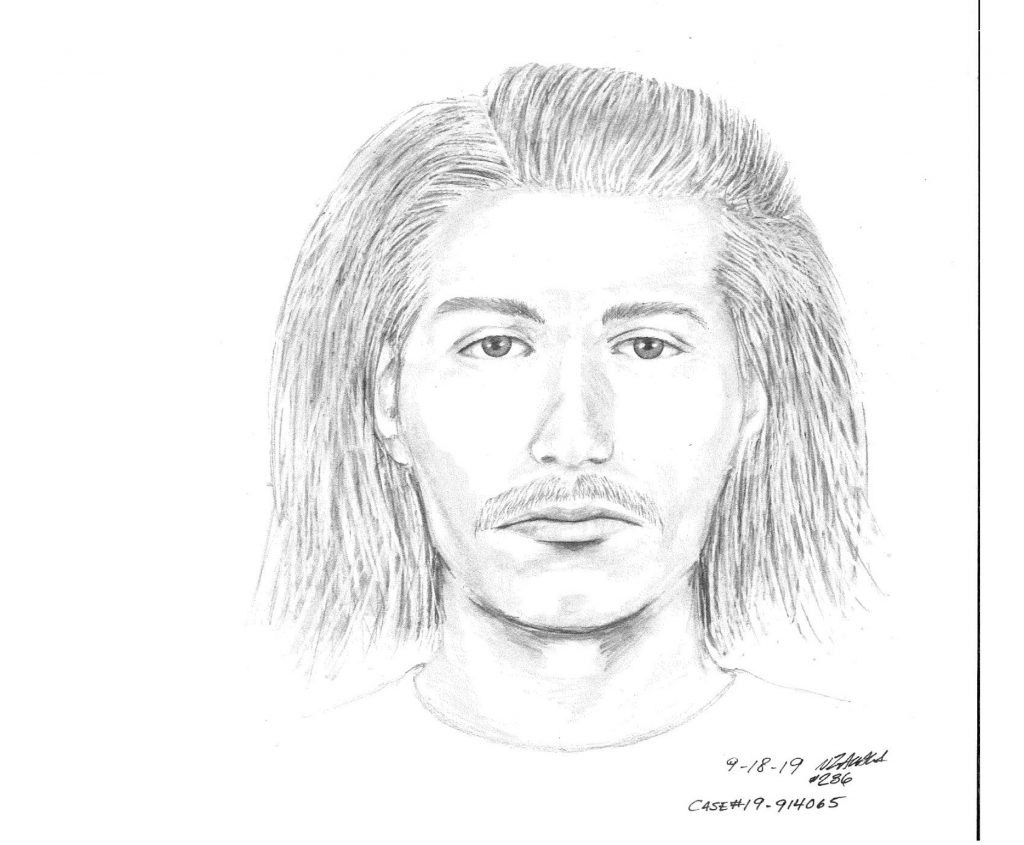 Officers say the suspect is Hispanic or Latino between the ages of 35 and 50 years old. He is between 5’9” and 6 feet tall with a medium build. He has slicked-back hair and a grey mustache and was wearing a white t-shirt and long black shorts. He was last seen in the area riding a grey and black mountain bike.

“I don’t think there was a single cop since this incident happened that hasn’t had a lump in their throat about this one and we want this guy,” said Kazem. “You don’t go around assaulting anybody, but you especially don’t assault a senior citizen who’s defenseless.”

Police tried to work the case, but have unfortunately hit a wall. They have released the sketch with the hope of receiving new leads.

If you see the man, you are asked to call 9-1-1 immediately.

“If someone is audacious enough to hit a helpless old man on the head with a rock and steal property from him, there’s probably nothing that they wouldn’t do,” said Kazem. “This is a true victim of crime that any of us could have been. Any help we can get from the public…we would love nothing more than to get information from anyone.”

The cemetery did not have security cameras in place at the time of the attack. Police are asking the public for any security video from the streets around Mission City Memorial Park including Winchester Boulevard, Dolores Avenue, Knowles Avenue, Dome Avenue, Talia Avenue, and Bohannon Drive.

Public Safety
Author Press ReleasePosted on May 14, 2022
Coldplay will be performing at Levi’s Stadium on Sunday, May 15 at 7 p.m. Approximately 50,000 attendees are expected. Event information can be found...
SPONSORED