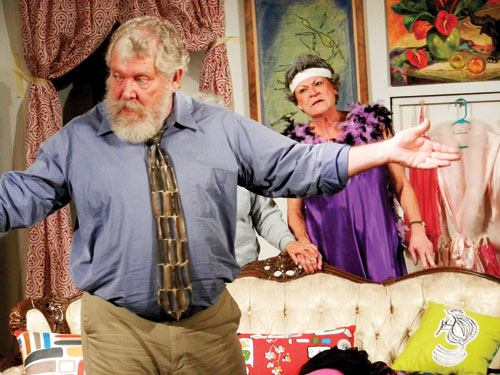 Bridget Charles is spending the summer before starting law school at her grandmother’s home. For most, this would be a relaxing couple months of Bridge, Bingo and Canasta before the strain of a full semester of legalese, but Charles soon finds out her grandmother is deeply involved with something naughty – naughty knickers, that is. Such is the premise for the Santa Clara Players’ current production, Nana’s Naughty Knickers.

Having an 80-something-year-old grandmother who likes a little lingerie isn’t such a big deal. However, Grandma Sylvia running an illegal boutique (Saucy Slips Etc.) from her apartment and selling naughty knickers to every senior in New York (“[They’re] winter chickens – kind of like spring chickens but older”) is a bit of a problem.

Soon Charles not only finds herself covering for her grandmother in front of the cops – her love interest, and the somewhat dense Officer Tom Grady – but hiding the goods when her grandmother’s sneering landlord Gil Schmidt comes around seeking a way to evict her from the rent-controlled apartment she’s lived in for decades.

As it turns out, there’s more to Saucy Slips Etc. than meets the eye and a simple twist settles the score when things get a little bit out of hand. Perhaps Saucy Slips Etc has saved more than just Sylvia Charles from senior boredom; it may end up saving Schmidt as well.

Nana’s Naughty Knickers has an incredible cast. There is no weak link as every performer plays their part to perfection. Mandy Armes (Bridget Charles) is wonderful as the worrisome future lawyer and Mary Horne (Sylvia Charles) is a fantastic grandmother figure – one who doesn’t quite realize all of the hoops necessary to run a business from home (like the need to charge sales tax and pay the IRS). Even the smaller roles like the UPS Driver (Fidencio Enriquez) are outstanding and have witty one-liners (“You must be drinking your milk because your body is good”).

Santa Clara Players’ version of Nana’s Naughty Knickers is hilarious and the audience will find themselves laughing – or at the very least snickering – throughout the two-act play.

Arts & Entertainment
Author Melissa McKenziePosted on September 29, 2022
Alison Starr may have grown up in Los Altos, but the actress, who is performing off stage in South Bay Musical Theatre’s upcoming production...

Arts & Entertainment Community
Author Carolyn SchukPosted on September 23, 2022
Santa Clara’s Art & Wine Festival returned after its two-year COVID hiatus, and for the 20,000 people who came out on Sept. 17 &...