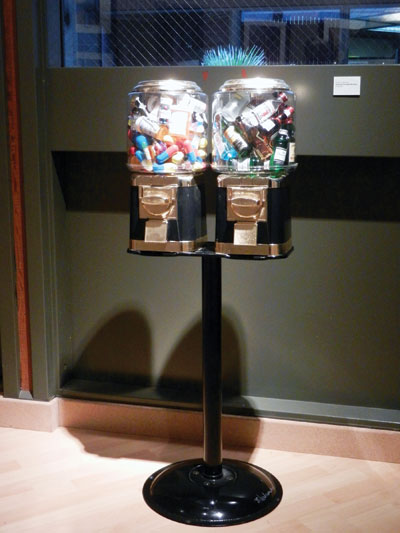 Addiction plagues millions of people each and every day. While many seek help for their problems, others choose to further self-medicate and fall deeper into the depths of their damaging behavior. Barbara Weiss, a San Francisco-based artist, chose to relive her feelings with depriving herself of something she wanted, cigarettes, in a constructive way – through art. Now, at Mission College’s Vargas Gallery, Weiss’ work, as well as the work of eight additional artists is on display to “provide insight into the struggle inherent in facing addiction.”

“While I was going through the process [of quitting smoking], I started making paintings about what I was feeling,” said Weiss. “I felt incredible self-denial. I hated it. I did a whole series of paintings about what it felt like to be denying myself of something I wanted. I felt like my best friend had died. I felt like life would be fine, all I had to do was have a cigarette and everything would be fine again. But, I quit and I painted during the worst of it – the first six or seven months. I painted constantly. And I wanted people to see this work because it’s a good, strong body of work.”

Weiss curated the show, which runs through November 17 and deals with topics from nicotine addiction to cocaine dependence. There is also a painting dedicated to love addiction and two pieces focusing on depression.

“Now Yoko [Ando]’s pieces are kind of interesting,” said Weiss of another artist featured in the show. “She claims that she’s addicted to depression and she doesn’t feel it’s a physiological thing. She actually feels as if it’s an addiction for her because she decided that one day she was not going to be depressed anymore and it worked. After years and years – her whole life – of being on medications to try and control the depression. She quit taking the drugs and decided she was not going to be depressed anymore. That’s when she realized she was addicted to being depressed – that it became a crutch for her in life. So I think it is really interesting – something very different.”

Some of the pieces are dark, while others border on whimsical, like Weiss’ “Victory,” made with nicotine gum wrappers and wood dowels. Another of the playful pieces in the show is Bette Linderman’s “Getting Through Monday.” Linderman took two candy dispensers and filled them up with items used to “get through Monday,” like mini bottles of alcohol and pill bottles.

“I just love that piece – the creativity in the found objects and putting those two things together,” said Weiss of Linderman’s work. “In or society these are the things that we use in order to get through Monday. You become addicted to those substances in order to get through your day. Just the juxtaposition of putting those two things together into the candy dispenser as if they were innocent things that get you through Monday – and yet they’re not so innocent at all. So I like that piece for that reason. I think it’s so clever.”

Two days before the show’s closing reception is The Great American Smokeout, a day created by The American Cancer Society to encourage smokers to make a plan to quit their addiction. Weiss planned the show to coincide with the event because quitting smoking changed her life.

“I don’t even think about it anymore, I really don’t…It feels really good to be free.”