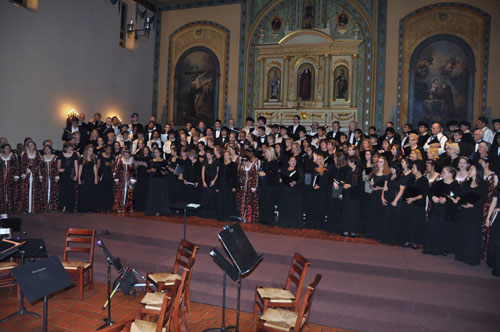 “We consider this a rebirth, to start another 50 years of presenting our music to the Bay Area,” says Board of Directors President Ron Paradies.

The St. Francis Chamber Choir was directed by Margaret Sullivan Durando, and the Madrigals, who wore Renaissance costumes made by some of their parents, were directed by Jill Denny. Both choral groups sang in several languages. The Saratoga High School String Orchestra accompanied the Santa Clara Chorale when they sang “In Windsor Forest” from the opera “Sir John in Love.”

For the finale, the combined choirs overflowed the chancel of the mission church, blending their voices to sing the traditional American spiritual “Down by the Riverside.” The audience, which included many proud parents, was invited to sing the final verse with the choirs.

“The collaboration between the three choirs is incredible. The church is so beautiful, and then having the opportunity to hear the Chorale here is unique,” says Santa Claran Fernando Rodriguez, whose daughter, Sylvia Rodriguez, has sung with the Santa Clara Chorale since she was a high school senior.

“It’s a beautiful concert with a lot of energy,” says Sylvia’s mother, Haydee Varela. “We haven’t missed a concert since Sylvia started singing.”

“It’s so great that the young people get to come and hear the Santa Clara Chorale because they can hear more mature voices and know what’s ahead for them,” says Harry, director of the Music School of Sunnyvale Presbyterian Church.”The audience is getting such a wonderful experience, and the Chorale is getting a new audience of parents.”

“The Santa Clara Chorale outreach means so much to those of us in the schools,” says De La Rosa, Director of Choral and Vocal studies at West Valley College. “Each of these singers tonight started early with music lessons and practice. Their excellence is also the result of some fine education going on in the classroom.”

The Santa Clara Chorale received a $3,453 grant in 2011 from Arts Council Silicon Valley for outreach at two Santa Clara schools. A program at Buchser Middle School culminated March 29 in a Pops Concert with the Chorale.

The Santa Clara Chorale is conducting a nation-wide search for a permanent artistic director. Dr. Ryan Brandau, its former director, accepted a position on the East Coast. Board of Directors President Paradies says that the Chorale hopes to fill the opening by May 2013.

“Comfort and Joy,” the Chorale’s December 7 and 9 concert at Mission Santa Clara, will be conducted by Dr. Charlene Archibeque, professor emeritus at San Jose State University. For information about the Santa Clara Chorale, visit www.scc.org.

Arts & Entertainment Community
Author Shawn ChongPosted on September 8, 2022
“Working” is a musical about the unsung jobs of the world. From millworkers to masons and from house mothers to delivery men and retirees,...
SPONSORED