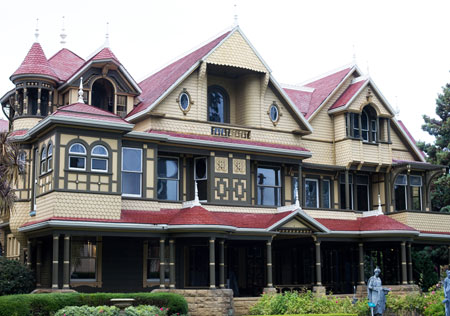 Ominous signs directing passersby to the famed Winchester Mystery House line freeways from San Luis Obispo County on the 101 and Kings County on the 5, but while much can be said or speculated about Sarah Winchester’s reasoning for continuously building additions to the San Jose home, not much is said about the mansion itself.

Why did Sarah Winchester, born in Connecticut in 1839, move across the country after her husband’s death in 1881 and set up a home in what is now known as San Jose? The answer is as much theory as is it fact and adds to the mystery surrounding the entire estate. However, Winchester’s reasons for moving have nothing to do with the Winchester Mansion, or as Winchester called it, Llanda Villa because the Santa Clara Valley reminded her of the Llanda Alvesa, an open plain at the base of the Pyrenees.

In 1886, Ned Rambo, the San Francisco agent for the Winchester Repeating Arms Company insisted Winchester visit the Santa Clara Valley and took her to see a nearby ranch for sale. The eight-room farmhouse was small by Winchester’s standards, but she paid $12,570 for the house and forty-five acres of land anyway.

As the Queen Anne Victorian-style home expanded, much like many of the estates owned by the wealthy of the time, Winchester’s dream home began to take shape. Winchester instructed the builders and studied architectural journals. Instead of using a full set of drawings, Winchester sketched the plans by each living space and when the results were not up to her standards, she had the project torn down and rebuilt. The end result was a maze of halls and rooms connected by doors and windows.

The hallways of the second floor were lined with built-in drawers and the house was adorned with some of the finest Asian and European craftsmanship. The home’s ballroom consisted of carved wood placed in herringbone or diamond patterns. The floor was laid in an intricate parquet pattern of teak, maple, ash, mahogany, oak and rosewood. The walls and ceiling were decorated with carved moldings and trims. The front doors featured glass in four panels, two squares and two rectangles, and two detailed daisy window panels were placed in the front of the home.

Llanda Villa was built with water pumps to help create electricity, a carbide gas-production system and indoor plumbing. The bathrooms contained cast-iron bathtubs and porcelain sinks. Winchester had a solarium built for an indoor garden complete with an irrigation system that would be considered very green by today’s standards. As the plants were watered, the excess fell to the slanted floor where it was captured under trap doors and piped to Winchester’s outdoor flower boxes.

The Winchester ranch contained a caretaker’s house, several barns and outbuildings and various other home-like structures for tenants and gardeners. But, during the 1906 earthquake the property was severely damaged. The seven-story tower tumbled leaving a hole at the third level. Most of the chimneys fell to the ground or through roofs and shingles, wood, and glass collapsed into lower level rooms. Most of the third and fourth levels were demolished as was an entire wing of the home. Upon seeing the damage, Winchester removed all of the fallen debris but chose to leave the damaged areas as they were. In doing so, doors opened to thin air where balconies once were, chimneys were sealed off, some below ceiling level, staircases leading to upper floors were left intact even though the upper floors had been destroyed and water pipes protruded where window boxes once were. Winchester no longer made the San Jose property a priority although caretakers remained tenants while Winchester made her primary residence elsewhere.

An investment company bought the house and grounds almost immediately after Winchester’s death in 1922 and sold off the land. The house, still partially ruined from the earthquake, was placed on the market and eventually leased by John H. Brown who created the Winchester Amusement Company. Brown had an idea to cash in on the folklore attached to the Winchester home. Within nine months of Winchester’s death, the Browns had opened for business. The Winchester Mystery House has been entertaining guests with tales of séances and spiritualism since, although the current owners of the home wish to remain anonymous.