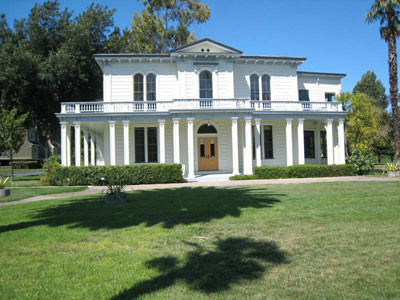 A drive through Santa Clara’s Rivermark neighborhood will yield the charming sights of new houses and apartment complexes. Many local residents don’t know that tucked away on the grounds of the Mansion Grove Apartments is the historic James Lick Mansion on 4750 Lick Mill Boulevard. James Lick was once the richest man in California.

“James Lick was a very important person,” says Victor Fernandez, a maintenance administrator for the Mansion Grove Apartments. “There’s a high school named for him called James Lick High School in San Jose. There’s also an observatory in a planetarium in Mount Hamilton named for him.”

According to the Santa Clara County’s online National Register of Historic Places, James Lick was born in 1796 in the state of Pennsylvania. In 1848, Lick arrived in San Francisco, and then later to Santa Clara County. He built his mansion in 1858. His real estate investments during the California gold rush made him rich. He died in 1876 leaving behind a multi-million dollar estate, much of which was donated to charity.

Today the general public can visit the Lick Mansion and its accompanying mill. According to the history printed on the round brick mill, the mill was built in 1855 as a flour mill. In 1873, the structure became a paper mill. In 1882, a fire destroyed the original mill. The new mill rebuilt in 1902 was used to make alcohol.

“When it was a flour mill, the mill was powered by water from the Guadalupe River,” says Fernandez.

“Having a historical landmark here makes this the most interesting place I’ve ever worked,” says David Portus, the general manager of Mansion Grove Apartments. “Out there at the mansion, there’s ample property. For something of this size to still be standing in California, that’s just amazing.”

The Lick mansion is now up for sale. The interior of the 8650 square feet mansion holds 22 rooms with two large community bathrooms on the first floor. Some of the second floor bathrooms are now storage spaces, but they can be converted back to bathrooms. The home reflects late Victorian-era Italianate architecture with magnificent woodwork and imported marble fireplaces.

Benjamin Guilardi, a real estate agent with Alain Pinel, is trying to sell the mansion and the mill, which could be converted into a theater or a conference hall.

“I love the romanticism and historical nature of the site,” Guilardi says. “Users of the mansion will have access to the basketball and tennis courts and picnic facilities, which are a part of an open space surrounding the mansion and also maintained as part of the Mansion Grove Apartments.”

“We have been getting inquiries from businesses for uses of the mansion and the granary as a conference center, a corporate retreat center, a bed and breakfast, [a wedding and banquet site], and housing units for incoming executives of major Silicon Valley companies,” Guilardi continues.

“The mansion has been converted from single family residential use to commercial office [use],” Guilardi adds. “However, the City of Santa Clara is also considering policies where owners can request converting [houses] back to their original use without having to go through the re-zoning process, in which case the mansion could easily be converted to residential use as a staff level request. All uses, except commercial office use, are subject to the City of Santa Clara’s approval.”

Those who wish to learn more about touring and buying the mansion can contact Benjamin Guilardi at (408) 357-7910 or (408) 596-1111. For a virtual tour, visit www.guilardi.com and click on “My Listings.” Those who are interested in sightseeing the outside of the mansion and mill can contact Mansion Grove Apartments at (408) 980-0502.