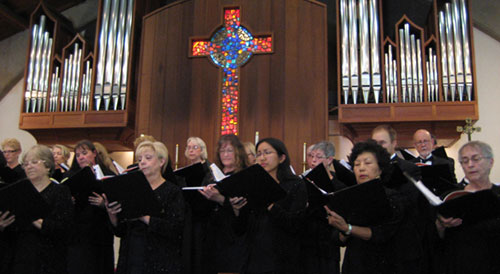 “It was an awesome season. The chorale is a treasure in our area. We’re so lucky to live here and have access to such wonderful cultural events,” says Rita Boren from Los Gatos at the Santa Clara Chorale’s Encore Concert on June 2 at St. Mark’s Episcopal Church in Santa Clara.

The chorale presented the end-of-season Encore concert to express its gratitude to St. Mark’s Episcopal Church for providing rehearsal space.

Each of this season’s five concerts was conducted by a different guest director as the chorale conducted a nation-wide search for a permanent artistic director to replace Brandau, who accepted a position on the East Coast at the end of the 2011-2012 season.

“Each director adds their own personality into the delivery of the music,” says alto Elsbeth TeBrake. “It was great for a year to add their diversity to the quality of our singing.”

The Santa Clara Chorale is a non-profit organization open to singers from Santa Clara and surrounding communities. It is funded in part by grants from the City of Santa Clara and Mission City Community Fund. For information, visit www.scc.org.

“This is a community choir with people from all over and every background—anybody who loves music and wants to sing together,” says TeBrake.