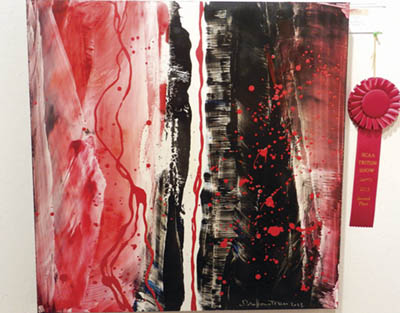 The Santa Clara Art Association celebrated its 40th year with the organization’s annual art show at the Rose Shenson Community Art Gallery. The show, which runs through June 22, was judged by Lindsey Kourvaris, curator of exhibits and collections at Santa Clara University’s de Saisset Museum.

Kourvaris chose all of the winners, except the Director’s Award, which was chosen by the Triton Museum of Art’s Chief Curator, Preston Metcalf. This year, Metcalf gave his award to Sam Orme’s acrylic submission, “Greybeard.” “This small, curio cabinet portrait captures a mood as well as a likeness,” reads Metcalf’s comment. “This is what carries a portrait beyond reproducing an image to evoking a connection between artist, model and viewer. There is a nice consistency between the subject and background. It is a delicate and successful work.”

Best of Show went to James Thomas’ watercolor piece, “Chaos on Main Street.” “The artwork conveys the mood of the title exactly – a city; a chaotic scene,” reads Kourvaris’ comment. The work is abstract, but the message and cityscape is clear – streets and buildings are easily seen.

Another special award, Emerging Artist, went to Gabriel Ibarra for his photograph, “Japan Town Butcher Shop.” “All of the elements are strong because of the composition and treatment of light,” says Kourvaris in her comment.

Additional winners are as follows:

The Rose Shenson Community Art Gallery is located on Don Ave. (behind the Triton Museum of Art). The gallery will be open on June 22 from 10 a.m. – 5 p.m. For more information on the Santa Clara Art Association visit www.santaclaraart.org.

Concerts in the Park Start