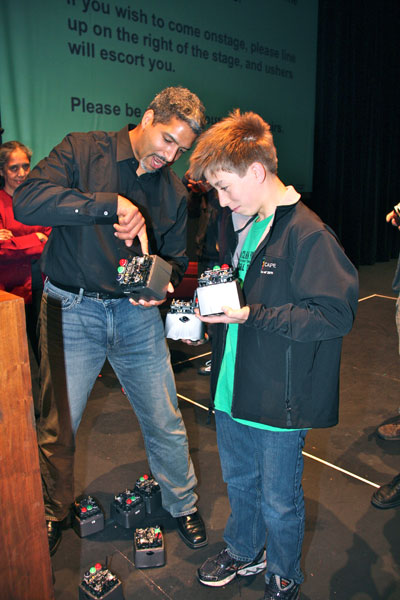 It’s not enough for robotics expert Dr. James McLurkin to be passionate about robots and artificial intelligence and love his work as his life. He wants everyone else, children in particular, to share his passion for science and engineering.

McLurkin, an assistant professor in the Department of Computer Science at Rice University, Houston, Texas, is renowned for his study of swarm robotics. He was the third and last expert in the 2011 – 2012 Santa Clara University President’s Speaker series “Engineering with a Mission,” which honored the centennial anniversary of the School of Engineering.

Dr. Christopher Kitts, an associate professor and Director of SCU’s Robotics Systems Laboratory, introduced the man who, as his presentation was titled, “Dances with Robots.”

“McLurkin is considered one of the leading five robotics engineers in the U.S.,” says Kitts, who later moderated the question period at the presentation’s end.

Inspired by the behavior of ants and bees, McLurkin’s research focuses on creating software for large swarms of autonomous robots that, like insects, can perform individual tasks that contribute to the goals of the group.

“How has nature solved the problem?” he asks.

Not one to travel alone, McLurkin brought eleven robots with him from Texas for his presentation in the Louis B. Mayer Theater on April 16, which just happened to be his 40th birthday.

McLurkin’s remote-controlled robots each measure about four inches square and weigh under a pound. They have a small motor, a plastic bumper skirt for protection, three tiny dome lights, and a camera.

On stage, at McLurkin’s command, ten little robots swarmed around the floor just like the insects they were modeled after. They extended their three-foot range of communication by relaying information. The eleventh robot stayed put—out of battery power.

The robots, which cost $2,500 each, will be replaced by new ones this summer at a more affordable $250 each, allowing robotics engineers to build lots of them. In case you want to make your own robot, McLurkin says that a blueprint for the new, open-source design will be posted on the web, perhaps as soon as July.

“Building robots can be helpful in motivating interest in engineering,” says McLurkin. “It can excite engineers into these careers.” His own career started with cardboard and tape constructions, model railroads, Lego constellations, and video games. He built his first robot when he was 16.

Swarm robots could be used for practical applications in exploration, mapping, security, and warehouse distribution. They could cover large areas where people don’t want to or can’t go, such as land-mined areas, undersea, and outer space. Other applications include industry and the medical world, where robots could be used in surgery and to assist with patient physical rehabilitation after a stroke.

“A master in the art of living draws no sharp distinction between work and play,” McLurkin tells the audience at the end of his presentation before everyone swarms on stage to meet him and play with his robots. The anonymous quotation resonates with the man who dances with robots and tempts us all to dance beside him.

Engh broke the exciting news to the Santa Clara Weekly that Apple Computer Inc. co-founder Steve Wozniak, who was the second presenter in the President’s Speaker Series, will return to campus June 16 to speak at the 161st commencement ceremony at Buck Shaw Stadium, 8:30 a.m. (But you need a ticket to get in!)