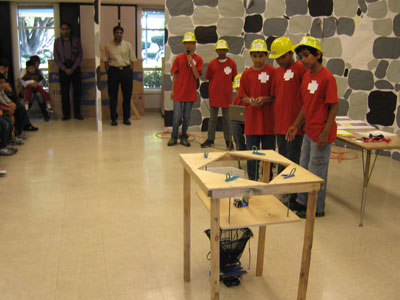 The vehicle finished the task just seconds before the three minute time limit ran out. The boys jumped up and down with joy when they learned their team had won 2nd place in the 5th-6th grade Division of the contest. Each team member went home with $125 and a medal on a ribbon.

Anish Saha, a student at Millikin Basics+ Elementary School, initiated the effort with five other fifth grade students at the school to enter this challenge. Since November, Saha and his teammates had been meeting on weekends to discuss the plans for building a vehicle with Lego pieces, bolts, rods, and other materials. Saha’s father was an advisor.

“[Another teammate and I] created the base of the robot used in the Tech Challenge,” Saha says. “We put the Lego pieces together to make the base for the robot.”

“I’m going to put three-quarters of the prize money into my bank account to save for college,” Saha continues. “And I plan to spend some of it to get a gift for my dad because he helped my whole team.”

For Tomas Panasyuk, one of his tasks included making part of the forklift, which required that he drilled holes into some Lego pieces.

“I used an actual electric drill- my dad helped me with this,” Panasyuk says. “I’m going to spend some of my prize money on video games for the summer time.”

Tyler McNierney helped create a “neck” the stranded person could fall into in case the person missed landing onto the vehicle’s main platform during the rescue.

“When we found out we won, my father screamed so loud his voice became hoarse,” McNierney says. “I plan to use the prize money for my college education. I’d like to be an environmentalist or a scientist someday.”

During the Tech Challenge, Aditya Chinta made sure the navigation of the vehicle ran smoothly. He had also worked on putting the three motors together.

“[While working on this project], many times we had different ideas but once we got to the end of the Tech Challenge, we were much better with communication,” Chinta says. “I plan to use the prize money to buy a watch because I don’t have one.”

For Rikesh Mehta, one of his tasks was creating the stranded survivor to be used in the challenge.

“I’m going to give a little of the prize money to charity, one that helps stop animal abuse,” Mehta says. “I’d also give some money to my grandparents because they’d enjoy it.”

Shone Patil discusses his role in building the vehicle.

“I built the base vehicle’s prototype and the fork lift’s prototype,” he says. “I have my own [Lego set] with all the pieces to build a robot. I also used a program that has a controller letting you choose which direction your vehicle would go.”

“I’m not sure what I plan to do with the money but I will not waste it,” Patil continues.” I’d like to thank all of our parents who pushed us to do this challenge, especially Anish’s dad.”

“For the kids who will be reading this article in the newspaper, I hope they will be inspired by our win and participate in the 2013 Tech Challenge,” Saha says. “I hope they will also win.”

“I’m so proud of the winners and am thrilled for them,” says Melba Rhodes Stanford, principal of Millikin Basics+ Elementary School. “I see great futures in science and technology and many different areas looming large for them.”

Community Schools
Author Carolyn SchukPosted on April 2, 2014
Next week you could enjoy some fine California vintages while helping a group of young people who are rarely awarded scholarships. How? By buying...

Schools
Author Alissa SorotenPosted on October 9, 2020
The public consensus at Thursday’s Santa Clara Unified School District Board of Trustees meeting is that there is no consensus. During public comment, the...

Schools
Author AdminPosted on December 21, 2011
After 30-plus years of teaching leadership and being a truly dedicated Vice Principal at Wilcox High School, Kathleen MacDonald was honored by the San...
SPONSORED