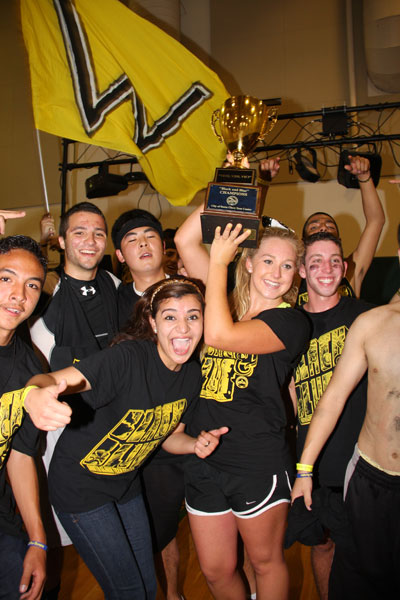 A dynasty was in the offing. Just one more win would have given Santa Clara High School (SCHS) their third straight victory at the Black and Blue Olympics. The rules declared if one team won three years in a row, they would be declared a “Dynasty,” giving them even more bragging rights. But the students from Wilcox were determined not to let SCHS’ dream become a reality.

“The amazing thing is all three years, only one point has separated each team in the final score,” according to Rich Casem, Recreation Coordinator for the City of Santa Clara’s Park and Recreation Teen Center. “Even though Santa Clara had confidence from the two previous years’ wins, Wilcox students knew the importance to their student body of winning this year and they was what they did at the end of the night.”

The games in their current form are three years-old, but the Olympics have been around for longer than that.

“The event started as dodge-ball tournament and two years later, it became a kick-ball tournament at Central Park,” Casem explains. “From that, it’s evolved into the BBO, where all kids from different groups – dancers creative arts, athletes, cheerleaders, singers – all come together, just like the Olympics. It’s a great collaboration of the best of the best of both schools.

“Although the event only lasts two and a half hours, it’s still very competitive,” he continues. “It’s not just a dance. If you’ve seen how the kids participate and how involved everyone is, it’s obvious it’s a lot of fun. It took a lot of hard work from both schools. But because of their efforts the BBO is what it is today – a fun event where both schools really have fun in trying to outdo each other.”

Fun was clearly the operative word as more than 700 students from both Wilcox and Santa Clara participated in the event. Combine that many students in one gymnasium, and their enthusiasm becomes more than evident as students from each school cheered their teams on in the competitions. During an event called 5 Minutes of Fame, the walls of the building literally shook from the intense shouting, screaming, and support shown by each school for their teams.

“Planning the event takes months and months – planning begins in September – and each year we try to add something new,” Casem says. “The BBO takes 25 people – both staff and volunteers working together.”

For Casem, the BBO unifies the student bodies of both schools and encompasses and includes everyone. “The games bring kids from the entire spectrum to come out and show pride in their school. It’s nice that there’s rivalry and for one year they get to say “Hey we’re the top school for one year.”

Pomeroy Gets Its Beautiful Day