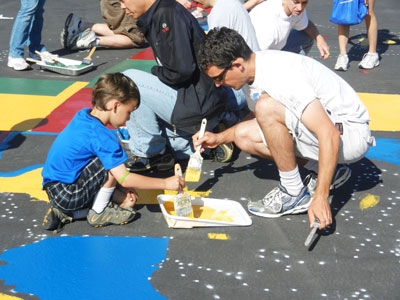 It was being called “garden of dreams.” But, it wasn’t just about a community garden for the children of Pomeroy Elementary School; it was about a complete overhaul given to the school April 27-29 as nearly 350 volunteers came out to help.

The volunteers, most of whom were part of the Beautiful Day organization, completed larger projects like putting in planter boxes, removing weeds and replacing an old tool shed in the school’s garden, as well as smaller projects like repainting the lines on the sidewalks.

“Basically we’re just giving the school a once over,” said Lori Dabak, the project manager for Pomeroy’s Beautiful Day.

“As part of Beautiful Day, we look around in the community and see what could benefit from the most help. So when we looked at schools and thought about which school could use a little freshening up, Pomeroy came up…So we met with Tricia [Ringel], the principal, and she was like, “sure, yeah,” and she’s been great to work with.”

The all-volunteer Beautiful Day organization, many of which are members of Westgate Church, tirelessly worked to prepare of Pomeroy’s “Beautiful Day.” Prior to the big day, an acquisitions team reached out into the community and asked local businesses for donations. From the little things, like coffee, to the larger items, like lumber and a new leather sofa for the teacher’s lounge, the community generously responded.

“It’s a community effort,” said Dabak. “Beautiful Day just started realizing that we wanted to partner with cities in Silicon Valley and thought “what can we do to bridge the gap where things are just not being done – thing we can get involved in and just do some things that budget cuts aren’t able to do.”

“This has been a brainchild since last November when we started working on it and planning and then we met with Tricia in January,” she continued. “We finally got in touch with her and once we figured out that we were going to do a school we just got to thinking back in November and just every month it just takes on a little bit more until we figured it out.”

What started with the simple idea of painting a United States map on the blacktop, turned into something worthy of an extreme makeover television show. After just a few short hours of work, Ringel was brought to tears. “This is awesome,” she said. “Thank you.” “And this is just the beginning,” chimed in Monica Watkins, one of the project directors. “We’re here all day and here tomorrow. We had a vision and here we are.”

Schools
Author Erika TownePosted on April 22, 2020
“It was the saddest thing because we said bye to our children on a Thursday, and the children were not going to...
Schools
Author Carolyn SchukPosted on January 22, 2014
Students Honored at First Meeting of New Year In choosing to honor four students at its first board meeting of the New Year, Santa...