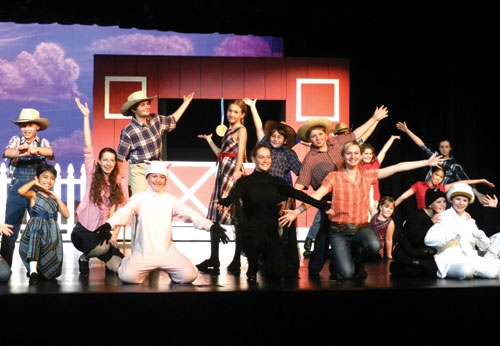 Charlotte’s Web, the story of the little pig that could and the spider that helped him become the pride of the town, is the current Roberta Jones Junior Theatre production running now through the end of this weekend.

In the opening scene we meet Fern Arable (Sofia Jakovcevic), the daughter of Martha (Logan Russell) and John (Elena Shain). When Fern learns the fate of one of the pigs, Wilbur (Sophia McDaniel) the runt, she pushes her parents to spare the axe.

Fern and Wilbur develop a bond and she visits the pig even when he is shipped off to her relatives, Edith and Homer Zuckerman (Samantha Girard and Michael Kennedy); but it soon becomes clear that the Zuckermans intend to fatten Wilbur up and sell him at the auction.

That’s when Charlotte (Claire Stone), the aging spider, decides to help. By spinning her web late at night, Charlotte shows the Zuckermans that Wilbur is “some pig.” Soon the media finds out and the Zuckermans are passively pressured to keep the pig, but only if he wins the blue ribbon at the upcoming fair.

There is no surprise in the outcome of this tale as Wilbur loses the prize, but wins a special award for being “terrific,” and again, his life is spared.

The opportunity for youth with varying degrees of acting and singing ability to be a part of a show is one of reasons why kids continue to get involved in RJJT. It is truly a community production.

Charlotte’s Web can be seen at Mary Louise Mello Auditorium at the Community Recreation Center at 969 Kiely Boulevard in Santa Clara. Performances are Friday and Saturday, November 16 and 17 at 7 p.m. and Sunday, November 18 at 2 p.m. Tickets are $8 for adults and $5 for children. Tickets can be purchased at www.rjjt.org.

Casting Call
Children ages eight to 18 are invited to join the cast of the group’s next performance of The Music Man. Auditions are January 2 and 3, 2013 from 3:30-6:30 p.m. with callbacks on January 4 from 4-7 p.m. For more information visit www.rjjt.org.