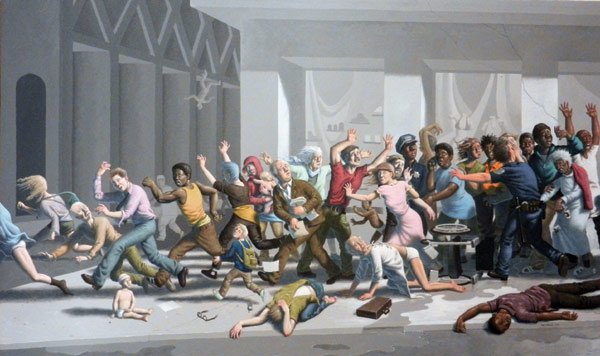 For centuries people have been mistreating others in the name of whatever god they believe in. Religion and religious extremism remains a hot political topic and the reason for many of the biases in society. The Triton Museum of Art explores the idea of extreme religious views in “Splintering Humanity: Religious Extremism in Defiance of a Global Community.”

“This is a really heavy-duty exhibit,” said Carmen Pascual, visitor service associate for the Triton. “Some people become very uncomfortable in here because they’re uncomfortable with their own beliefs and it all comes out in here.”

The exhibit puts viewers face-first with the various forms of extremism in America and forces them to think about the issues impacting our world.

“Not limited to any particular religion, the nine artists featured in ‘Splintering Humanity: Religious Extremism in Defiance of a Global Community’ explores the harrowing commonalities found in differing forms of religious extremism that continue to threaten…a tolerant world,” reads the Triton’s exhibit statement. “Whether it is the marginal fundamentalism of Islam or the politicized narrowness of fundamental American Protestantism resorting to intimidation and violence in an attempt to force their views or the militant extremism of an unyielding fundamental Jewish sect, or any other group of religious extremists that deny and violate the very tenets of their proclaimed faith…to deny others their human rights, all are subject to these artists’ critical eyes. Each, in their way, explore and portray their views on religious extremism, its devastating results on societies and individuals, and their hopes for a world that can one day move beyond its miring effects.”

Because of the nature of this exhibit, there is an additional explanation near each of the artists’ works. The statements go into detail about each piece and its significance in the spectrum of religious extremism.

Guy Colwell’s three painting entry shows the resulting effects of disasters like 911. “The harrowing results of [9/11, the conflict between Israel and the Palestinians and Hezbollah, and the bombings in southern Lebanon and Gaza] are depicted in “Disaster” and “Recovering Bodies,” reads the plaque next to Colwell’s work. “People flee. The sick, weak, and injured are lost in the fear-fueled rush. The religious extremists have made their presence felt. And then comes the sobering realization that the most difficult pain inflicted by the religious extremists is in the loss of our loved ones and a compromised way life.”

“This is a pretty powerful exhibit,” said Pascual. ” Some people leave saying, ‘that was really heavy. It was a really heavy exhibit.’ And, some people say they don’t like it and others can really relate – can accept what’s going on.”

Splintering Humanity is on display until November 25. For more information visit www.tritonmuseum.org.