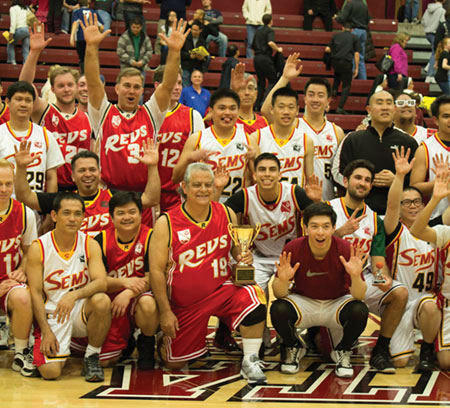 Pitting the students against the ordained, the challenge gives current and soon-to-be men of the cloth a chance to come together and raise money for seminarian formation in the Diocese of San Jose.

The stakes were higher than they had been in quite some time. After jumping ahead 3-1 in the overall series, the Revs had lost the past two years in a row. At three all, this year would determine which team would take the series lead.

The Sems had put in effort both on and off the court. “We prayed,” said first year seminarian Michael Scott. “I’m serious. We did pray…They have the wisdom and experience.”

“We’ve also been practicing Tuesday nights since we came back from Christmas break,” added second year seminarian Michael Liliedahl. “We’ve had maybe three or four practices on Tuesday nights for about three hours.”

The Revs, however, were not as proactive in their preparations. “We’ve had a few practices, but it’s very difficult to get the priests together because of their ministries and the different parishes,” said Father John “3:16” Poncini, vocation director of the Diocese of San Jose. “But we’ve been practicing when we can. We have a little bit of a strategy, but we’re going to do it. We have God on our side.”

At the end of the first 10-minute quarter, the Sems were holding on to a one-point lead, but by halftime, the Revs had exploded and took a 10 point, 27-17 lead into the break. The Sems would need a statement of a third quarter to close the gap and prove they would be the team to beat. After the end of three, they had closed the Revs’ lead to four (40-36).

With seven minutes left in the fourth, the game was tied. From there, it would be a ping-pong match of gains and losses through the end of the game. At the minute mark, the Sems were holding onto a slim three point advantage, but with 32 seconds left, the Revs and chipped away and evened the score. As the clock dwindled down, the Sems had a gem of a chance with 13 second left, but missed the shot. It was then they made a critical mistake – they fouled the Revs.

Father Stasys “The Setamroller” Mikalonis of Saint Elizabeth Parish found himself at the charity stripe with five seconds remaining. With the crowd on his side, Mikalonis hit the first shot, but missed the second. By then the damage had been done. The Revs took the game and series lead by a score of 54-53.

Father Sergio Ovando of Saint Martin of Tours Parish was named the MVP of the Revs while Mario Rizzo took the honor for the Sems. For more information on the Diocese of San Jose visit www.dsj.org.