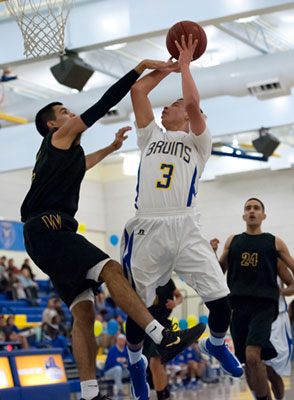 On February 15, as Coach Tony McGilvery introduced Johnathan Gomez (’13) and Tayyab Kahn (’13) to the rampant crowd on their Senior Night, the Santa Clara Bruins boys basketball team needed a victory against their cross-town rivals, the Wilcox Chargers. It would not come easily, though, considering the last time the two teams met, Wilcox beat down the Bruins, 57-44. Not only was pride, and city bragging rights on the line for the Bruins, but also their bid into CCS. With a victory, they would end their season tied for third place in the El Camino Division with a 7-5 record along with none other than the Wilcox Chargers.

It was a tremendous start for the Bruins and senior Kahn as he scored 12 of his 23 points in the opening minutes of the game to get Santa Clara out to an early and large lead. Along with great defense and rebounding from Gomez, Christian Lee (’14) and Damont Hardnett (’14), the Bruins ended the first quarter up 18-7.

As the second quarter got underway, not much changed for either team. The Bruins were able to beat Wilcox’s full court press, while also getting into the bonus early on, sending them to the free throw line for easy points. As the half came to a close, Wilcox was able to cut the lead down to 10, but as time expired, Lee received an alley-oop pass and laid it in, extending Santa Clara’s lead to 32-20.

At the beginning of the second half, the Bruins continued to pour it on the Chargers with three point contributions by Ronaq Virdi (’14) and great penetrating drives by Cole Lockwood (’14) who was able to slice his way through the Chargers defense, scoring 6 of his 17 in the third quarter. With Lee cleaning up the boards on both ends of the court, Santa Clara found themselves up 49-34 going into the fourth and final quarter.

Wilcox was able to show their grit and resilience, however, as the game was on the line. As the quarter began, the Chargers were able to force the Bruins into uncomfortable situations, causing them to turn the ball over multiple times, leading to easy buckets for Wilcox. With Santa Clara falling apart, and the Chargers cutting the lead all the way down to seven, McGilvery was forced to take a time out, hoping to rally his team for the final push.

While Santa Clara still struggled to score, the Chargers were not able to capitalize on their offensive woes. Hardnett was able to grab a few key, late game rebounds, keeping Wilcox just out of reach.

With 14 seconds remaining in the game, Wilcox had one final chance to cut the lead down to two, but great defense and a clutch steal by Lockwood forced the Chargers to put him on the line, sealing the Bruins victory and sending them to CCS once again, winning by a final of 62-58.

Bruins Pay Tribute to Alumni, Have High Hopes for Season