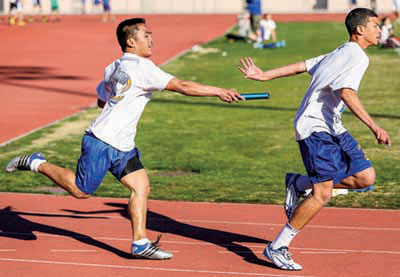 On Feb. 26, the Santa Clara Bruins Track and Field team hosted its annual Andy Anderson Memorial Relays—the first meet of the season for the Buins as well as the other three invitees: Lynbrook, Wilcox, and Homestead.

The meet is also a scrimmage, “[that] allows the athletes to participate and learn the rules of track and field in a low-key environment,” coach Julie explains. “The relay style format is great for team building. Some of the relays are not standard, so it gives the athletes a chance to set a new personal record for an event.”

Finally, the meet allows the coaches to, as L’Heureux puts it,”see where the team is at and what we have to do to have them ready for their first dual meet next week.”

Coach L’Heureux was very confident in both her boys’ and girls’ teams. She’s also anticipating many CCS appearances from both sides.

From the boys’ squad, several returning upperclassmen make up the CCS hopefuls, including Senior Dion Perry, who runs the100m and 200m dash, accompanied by Juniors Damont Hardnett (shot put), and Rick Duenas (800m). “[The Upperclassmen] are supported by a very talented group of lowerclassmen,” says the coach.”The boys did very well for their first meet.”

Things look good for young Bruins’ team, as the distance squad had a stellar cross-country season and looked very solid in their meet on Tuesday.

And Santa Clara expects to send at least one athlete to CCS. The Bruins pole vaulting squad – Libby Craig (’14), Stella Chung (’13) and Emily White (’13) – are all looking to have a great season. “We have high hopes that one of them will break the school record in the pole vault,” says L’Heureux.

Be sure to keep an eye on the Bruins season, as well as all their CCS hopefuls. The next dual meet will be at Santa Clara High School, Thursday, March 7 at 3:15 p.m.