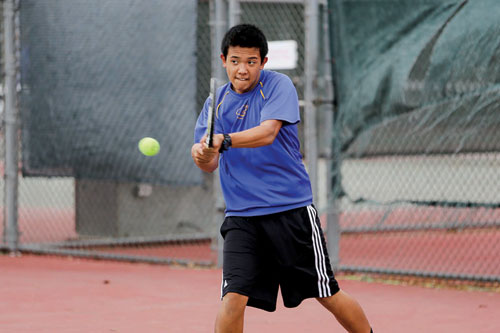 Rival high schools clashed in an El Camino Division show down on March 7 as Wilcox and Santa Clara’s boys’ tennis teams hit the courts. With portable classrooms occupying Santa Clara High School’s campus tennis courts, the boys would have to find a way to beat the 5-2 Chargers on neutral ground at the Central Park courts.

The Bruins have had a rough start to the season, and didn’t have an easy match against the Chargers. In the main action of the afternoon, the Bruins’ best singles player, Arch Dasilla (’15) matched up against Xuan, trying to rally his team to victory. It would not be so, however, as Xuan dominated for the Chargers, defeating Dasilla in straight sets, 6-0, 6-0.

With the Bruins’ number one singles player falling to Wilcox’s, doubles teammates, RJ Dacon (’14) and Druthi Srirama (’15) would have to fight hard for Santa Clara in order to avoid a sweep. Being matched up against Lam and Watanabe would be no easy task. The Bruins, once again, fell 6-0, 6-1 to the top pairing from Wilcox.

With the Chargers defeating the Bruins and completing the sweep in all seven matches, it was a tough loss to swallow for Santa Clara’s athletes. Head Coach Dominic Caserta would not hang his head after the game, praising his players’ willingness and drive to compete.

“My goal as the coach is to see my players compete, improve the skills, and represent Santa Clara High School well on and off the court. Even though we lost [Thursday], my players did all three things: they competed, improved from the last match, and displayed great sportsmanship.”