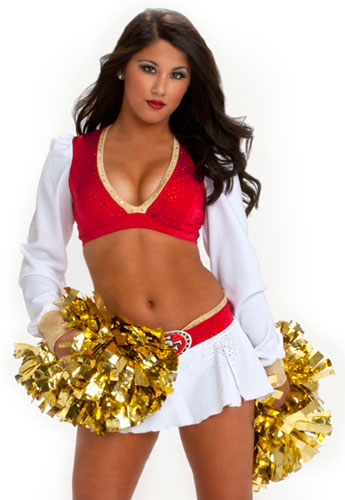 Jessa has fond memories of attending the Super Bowl and seeing New Orleans.

“New Orleans was amazing; it has such an electric vibe and the people are so welcoming,” she says. “When we landed at the airport, there were so many 49er fans. Although we wore regular clothes throughout the week, people would still ask us if we were cheerleaders.”

“We didn’t have music to dance to for a little bit so we tried to lead the 49er fans in a cheer during that time,” Jessa says. “At some point during the power outage, the whole stadium was doing the wave.”

Last March, Jessa went through a rigorous auditioning process to be a 2012 Gold Rush cheerleader.

“I’ve always wanted to be a professional cheerleader, specifically for the 49ers,” she says. “They held an audition where over 500 girls came. It was pretty intense. Every year, you have to retry out for the squad and there are 32 [spots for] cheerleaders. It’s nerve-wracking because there are so many beautiful, talented women in the room. But you really just have to stay in your own body and work on what you’re doing, and not compare yourself to other girls.

“You get there in the early morning around 8 o’clock,” Jessa continues, recalling the first day of audition. “All the girls warm up together. After warm ups, we’re taught a portion of a dance, and that all happens in 20 minutes. Then, they line us up in numerical order, and we each get a number. Thirty girls at a time have to do the dance for the panel of judges. After the girls go through the first portion of the dance, the judges go into a room to decide who keeps going, and who gets eliminated. Right after they call those numbers out, we’re taught the rest of the dance, and then the girls dance again for the judges, and more people get cut.”

According to Jessa, about 80 finalists remained after the first day of auditions. These finalists plowed through a series of further assessments, including a workshop emulating an actual practice session, an interview, and a final audition.

“The day the [selections were announced], I had to go on a website and find out if I got in,” Jessa says. “When I saw my name, I started crying. I was so excited. My parents were there and we were all so happy. My dad is a huge 49er fan, and he was just as excited as I was.”

Handbags and High Fashion at Soroptimists' 2

Sports
Author Andrew BenschPosted on December 8, 2022December 7, 2022
The Wilcox girls varsity basketball squad fell to 1-2 on the season after Tuesday’s home loss against Carlmont. A 45-23 final in the non-league...