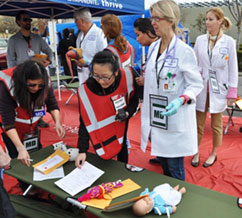 “Patient 22” did not survive the crisis. She was the victim of a huge earthquake and resulting chemical spill that sent 300 other victims to the Kaiser Permanente Santa Clara emergency department. There, dozens of doctors, nurses, and staff were dealing with the “walking wounded,” injured, and those like “Patient 22.”

Fortunately, “Patient 22” was a pink-and-yellow furry unicorn doll, and the other victims were cuddly teddy bears, baby dolls, plush monkeys and whales.

“Even though we’re practicing here with toys as victims, everyone’s being very serious about this scenario,” said Dr. Joel Levis, Emergency Medicine and organizer of the monthly emergency drill. “Organizing monthly groups of human volunteers to act as victims is difficult to arrange, but we suspend disbelief using the toys. And it’s important to practice these important care skills.”

Indeed, few of the doctors, nurses, and staff were joking around during the two hour disaster drill. Armloads full of doll “victims” were “injected” into the scenario at regular intervals. Kaiser Permanente Santa Clara’s Emergency Department set up a “mass casualty” triage center outside the ambulance bay. A decontamination shower tent was working and staff in special waterproof “decon suits” washed “dangerous chemicals” off the victims.

“To prevent damaging the dolls, we put them in plastic bags to keep them dry,” explained Brenda George, RN and a manager of the Kaiser Permanente Santa Clara ED. “After decontamination the patients get sent to the appropriate treatment area.”

George said each “victim-doll” was fitted with an envelope containing a detailed description of its “injuries.” Depending on how badly it was supposed to be hurt, the doll would be sent to one of several pop-up tents.

Emergency staff carried the dolls, or put them on gurneys and wheelchairs to move them around. “Patient 22” was in the morgue tent. There was a collection of teddy bears, horses, and a small black-and-white whale in the tent for “walking wounded” – victims with slight injuries, not needing hospitalization. In each tent, doctors and nurses evaluated the injured patient for further care. Levis walked from tent-to-tent with his clipboard.

“Today’s scenario was dramatic and may never happen,” said Levis, “but we want to be ready for any emergency, large and not-so-large.”

Adding to the realism, all in the training exercise wore large, visible badges to identify their job titles. A Kaiser Permanente pharmacist used a wheeled “drug store” to bring emergency medicines to each tent. And the Radiology Department brought out a portable x-ray machine for the drill. Two-way radios crackled in the morning with information about the scripted “disaster” supposedly unfolding outside the hospital.

“We want to make sure that people receive safe, quality care,” said Levis, “even when we’re facing large numbers of patients.”