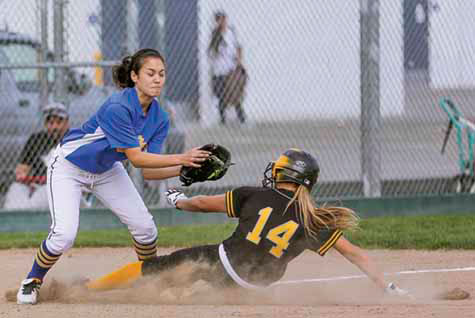 The Wilcox Chargers softball team has been dominant in the early goings of 2013, posting a 7-2 record to start the season. One thing they haven’t done, yet, is win a divisional game; something they tried to accomplish on March 14 against the Santa Clara Bruins.

During the first inning of play both teams were able to get runners in scoring position, but Pitchers Morgan Ratliff (’15) for the Chargers, and Shannon Peterson (’15) of the Bruins, were able to pitch their way out of danger in the top and bottom halves of the inning.

Peterson got herself into some trouble in the bottom of the second, however, as Ratliff drew a lead off walk followed by one of Hailey Thompson’s (’15) three walks of the game. Right fielder Cori Aggarwal (’14) then hit an RBI single up the middle for the first run of the contest. Later in the inning, catcher Breanna Ledesma (’15) drew a walk, loading the bases for the powerful Kristen White (’14). White hit a shot into deep center field, scoring two more runs, and putting Wilcox up 3-0 after two innings of play.

Meanwhile, Ratliff was able to silence Santa Clara’s bats with her fastball and off-speed pitches. The Bruins seemed to be off balance and guessing all night. After she pitched out of trouble in the first inning, she settled into an amazing groove, sitting down 18 consecutive batters through the first seven innings.

In the bottom of the third, Wilcox was able to strike again off the bat of Aggarwal as she lifted a high fly ball into deep left field that allowed the runner on third to advance home. It was her second RBI of the game.

The Chargers would score their fifth and final run in the bottom of the sixth, as White hit a deep ball to opposite field that just cleared the fence for a lead off home run. As she rounded the bases, the feeling in the dugout was that it was all but over as the Chargers took a 5-0 lead into the final inning of play.

With victory well in hand, Ratliff hoped to finish her stellar performance with a complete game shut out. However, with some timely hit balls, and misplayed grounders by her defense, she gave up two runs to the Bruins before closing the door on their 5-2 victory.

“I was very impressed with Morgan’s outing,” said Coach Laura Stott. “She did not seem too upset after the game, but I am sure she wishes she would have gotten the shut-out.” She went on to speak of the lack-luster defense in the seventh inning. “I can’t say I was happy with our defense in the final inning, but it is early in the season and it reminds all of us that we need to keep working.